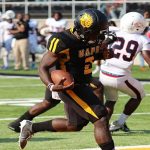 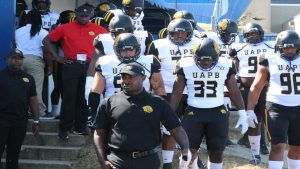 DB Shawn Steele made two takeaways in the final 3:28. His fumble recovery on the ensuing possession following the Porter touchdown run set the stage for the conclusion following a Golden Lion punt.

Steele’s interception with just over one second remaining at the UAPB 15 sealed the win.

Following a forced fumble by Solomon Brooks that was recovered by Isaac Peppers at the Lane 19, UAPB scored four plays later. Porter’s two-yard run on 4th and 1 extended the lead to 14-3 with just over 11 minutes to play until halftime.

Later in the quarter, Porter and Wilkes connected on a 49-yard touchdown pass to extend to a 21-3 lead with just over six minutes to play. After the teams traded field goals, UAPB led 24-6 at halftime.

Lane (2-3) rallied in the second half, outscoring UAPB 25-7 in the third quarter to tie the score at 31-all after three quarters.

In the fourth quarter, Skyler Perry’s nine-yard scoring run with just under 13 minutes remaining gave UAPB a 38-31 lead. Lane tied the score on the ensuing possession, leading to the late-game finish.