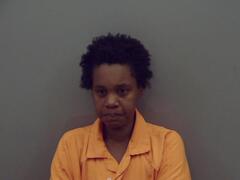 A Pine Bluff woman was arrested Monday after she allegedly took a vehicle that was parked at the Pine Bluff School District bus barn on North Linden Street.

The suspect, Felicia Boyd, 34, claimed during a court hearing that the driver of the vehicle gave her permission to take it.

During that court hearing, Detective Michael Merritt explained what Boyd allegedly did.

Merritt said officers later found Boyd walking on State Street and after waiving her right to an attorney, Boyd said the keys were in the vehicle and she took it because she was tired of walking. He also said the owner and driver of the vehicle said they did not give Boyd permission to take the vehicle.

Jefferson County District Judge Kim Bridgforth set a $5,000 cash-only bond for Boyd, who Deputy Prosecutor Caleb Conrad said has pending charges, after ruling prosecutors have probable cause to charge her with theft of property. The Public Defender’s Office was appointed to represent

Woman arrested for sexually assualting another woman inside local store