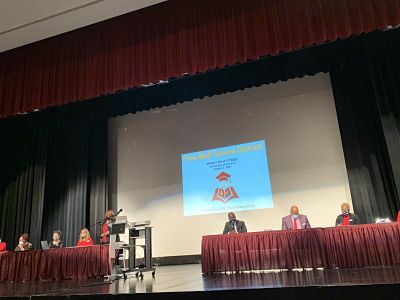 Warren explained the process the two school districts have put in place for the next school year, including the collaboration of resources, saving funds, and sharing their nine campuses. Of those nine campuses, Pine Bluff and Dollarway High Schools will remain separate. She also made the stakeholders present aware of what will change and what will remain the same. The missions, visions, and values of both schools will continue. Warren elaborated on the changes.

As far as attendance zones, Warren stated that that has not changed and students will continue to be placed at their original locations.

Dr. Wanda Van Dyke, assistant superintendent, spoke during the session and highlighted various facility management preparations made for the upcoming school year, including painting, power-washing campuses, new flooring, and updated air-conditioned units. She also noted the district and the state were approved to partner not only for educational purposes but also financially.

Additionally, Warren spoke about new safety measures that will be put in place to prevent incidents from occurring. In partnership with the Jefferson County Sheriff’s department, there will be four commissioned officers at Pine Bluff and Dollarway High Schools, Jack Robey Middle School, Robert  F. Moorehead Middle School, and at elementary sites. Campuses will have on-site security staff, too.

PBSD is offering a virtual academy for families to access if they choose. The application process for this ends August 11 and is offered for grades K-12 but will only be approved for students who have the ability to thrive in a virtual learning environment and parents or guardians will be present to ensure students are learning effectively.