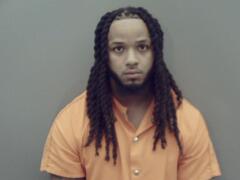 A Pine Bluff man was arrested Monday after he allegedly pointed a gun at his girlfriend.

During a court hearing Tuesday, Deputy Prosecutor Beth Carson described the circumstances that led to the arrest of 23-year-old Tyran Simmons.

Jefferson County District Judge Kim Bridgforth set a $10,000 bond for Simmons after ruling prosecutors have probable cause to charge him with aggravated assault on a family or household member.

Simmons said he would hire his own attorney and was ordered to have no contact with the alleged victim until the case is settled.

$5,000 bond was set Tuesday for a Little Rock man accused of trying to bring contraband into Tucker Prison

Possible Homicide as body found on 29th and Linden (Updated)