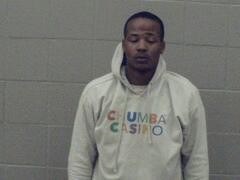 A Pine Bluff man was arrested Wednesday after attempting to use a check belonging to a deceased man to pay for items at Wal-Mart.

Jeremiah Young, 27, was taken into custody after police were sent to Wal Mart, Detective Sgt. Ryan Moheb said in a probable cause affidavit presented in court Friday.

Reading from that affidavit, Deputy Prosecutor Jill Reed said Young was attempting to buy several items with the check, which was made out for $2,152.32 and belonged to the truck shop.

Reed said Young has no prior criminal history and Pine Bluff District Judge John Kearney set a $10,000 bond for him after ruling prosecutors have probable cause to charge him with second-degree forgery. Young was told to come back to court Jan. 11.