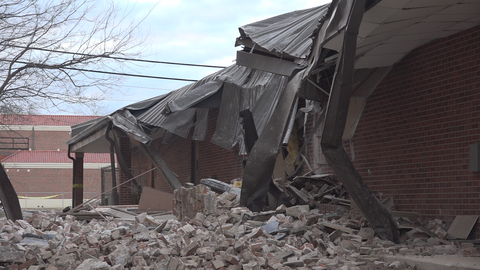 Debris from a building owned by Garland Trice that collapsed.

By a vote of 5-2, the Pine Bluff City Council on Tuesday voted to affirm the amount the city said Garland Trice owes for the removal of debris that resulted from the collapse of that building.

Council member Bruce Lockett, one of the five members to vote to affirm the legislation explained It to Deltaplex News.

Council members Glen Brown Sr., and Steven Mays voted not to approve the amount. Council member Ivan Whitfield, who also opposed the legislation when the public hearing was held was not at the meeting.

At its last meeting, the Pine Bluff City Council approved legislation authorizing Mayor Shirley Washington to appoint members to the newly created Convention Center and Public Facilities Board and the Mayor has announced her choices.

On the council agenda Tuesday were five separate resolutions, one for each of the new members, and al passed with no oppositoin.

Those members are as follows:

Bill Bridgforth, an attorney at Ramsay, Bridgforth, Robinson and Raley Law firm who has practiced business, regulatory law for 58 years and according to his application, also has extensive experience in the drafting and interpretation of contracts

Kemma Rhodes, who owns and operates four storefront businesses in the downtown area and has owned a business downtown for over a decade.

Suzette Goldmon, hospitality and tourism professor at UAPB who, according to he4r resume, bas extensive background in working in the hospitality industry, teaching and community relationships. She previously worked at UAM, the University of Tennessee at Martin, Tenn., Austin Peay State University at Clarksville, Tenn., The Art Institute of Raleigh-Durham/South and Argosy Universities, Durham, N.C., Oklahoma State University and others..

Letrece Harris, who In 1999 bought the old B.F. Goodrich building in downtown and turned it into a 200-seat restaurant called Inspirations on Main in 2000. She currently is the founder and CEO of   WHOLEROLL LLC,  sustainable bamboo paper company and brand and has been a member of the Pine Bluff Library Board, Pine Bluff Downtown Development and the Pine Bluff Symphony Board.

Marty Casteel, who is now retired after a 33-year career at Simmons Bank where he served as chairman, president and CEO from January 2013 until his retirement in 2020.  He is currently a member of the board of directors at Jefferson Regional Hospital and the Economic Development Alliance of Jefferson County.