Corben Alexander, 23, was accused of ramming a vehicle containing his former girlfriend and several other women Dec. 22 and breaking into a resident where another woman lived on Sunday. 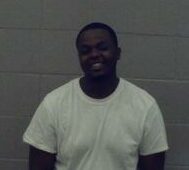 In the first incident, Deputy Prosecutor Jay Gerard said officers were traveling west on 31st Avenue when they were flagged down by several females who reported a disturbance.

Several witnesses who were in the woman’s vehicle gave similar stories to the police when they were questioned.

In that case, Pine Bluff District Judge John Kearney set a $10,000 cash-only bond after ruling prosecutors have probable cause to charge Alexander with one county of aggravated assault on a family or household member and three counts of aggravated assault. He was ordered to have no contact with the woman until the case is settled.

In the second incident, Gerard said police were sent to a residence in the 3700 block of Oakwood Road in response to a reported burglary in progress.

Gerard said a male, later identified as Marlon Clark, 24, was with the woman and pointed his gun at Alexander who then left the residence.

A $10,000 cash-only bond was set on that incident after Kearney ruled prosecutors have probable cause to charge Alexander with residential burglary. He was ordered to have no contact with the woman until the case is settled.

$25,000 cash-only bond set for man accused of breaking or entering