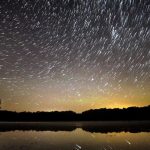 (KUTV) -Shooting stars will be covering the sky tonight.

The Perseid meteor shower can be seen from Monday night to Tuesday morning in the Northern Hemisphere, according to the American Meteor Society.

At its peak, 100 meteors will fly across the sky per hour, AccuWeather Astronomy blogger Dave Samheuhel reported.

“Perseids are not only numerous, they are beautiful. Most of the meteors leave a glittering trail as they pass,” Samuhel said. “They are multi-colored and many are bright.”

The fireballs are called Perseids because the area where they originate from is located near the constellation Perseus, the AMS explained.

AccuWeather predicted the weather should be clear in Utah, so people will be able to see the meteor shower. The moon, however, could limit visibility. The nearly-full moon will be shining bright for almost the whole night, making it difficult to see any of the dimmer meteors, AccuWeather reported.

If you can’t make it outside, the NASA Meteor Watch Facebook page will have a live feed from Alabama starting at 7 p.m. M.T. on Monday.