PBPD in early stages of a homicide investigation

The Pine Bluff Police Department is in the early stages of a homicide investigation after a victim was found deceased in his home in the 100 block of Talbot Street Thursday afternoon.

Family members at the scene identified the victim as 48-year-old Armechi Morgan of Pine Bluff. Investigators at the scene told DeltaplexNews.com that the victim has been deceased for “at least two to three days”.

The cause of death is under investigation currently according to Pine Bluff Police Chief Kelvin Sergeant.

This is the fourth homicide inside of the Pine Bluff city limits in 2020. There is a reward up to $50,000 for information that leads to the arrest and conviction of any suspects. 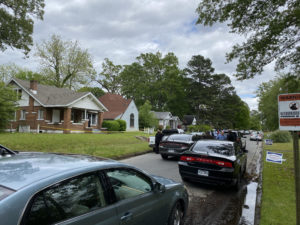 Man arrested in connection to weekend homicide in Pine Bluff