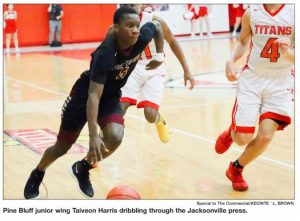 The Pine Bluff Zebras escaped a close one Tuesday night against the Jacksonville Titans to earn their first conference win 60-57.

Jacksonville is fresh off of the championship game of the King Cotton Holiday Classic basketball tournament, which made a comeback this year at the Pine Bluff Convention Center just after Christmas. The Titans lost to Long Beach Poly (California) 81-69. Pine Bluff lost all three of their games at the tournament.

Kaleb Higgins came out hot for the Zebras Tuesday night, scoring 12 points to help hold a 14-7 lead after the first quarter.

Higgins didn’t stop there, as Pine Bluff would start the quarter on a 10-2 run to extend their lead to 24-9.

Charles Harris helped the Zebras by adding five points in the quarter, including a triple at the buzzer to close the quarter with Pine Bluff ahead 31-15 at halftime.

In the third quarter, Jacksonville started to heat up with Davonte Davis scoring the first six points of the quarter.

The Titans outscored the Zebras 10-9 in the quarter but were still trailing 40-25 to start the fourth.

Higgins scored the first six points in the fourth, but Jordan Maxwell, Ryan Maxwell and Davis would each score four points apiece to spark a 12-0 run for Jacksonville as they cut into the Zebras’ lead 46-37.

Later, both teams traded baskets, but Jacksonville had the advantage of closing in and only trailing 53-50 down the stretch.

Higgins nailed a pair of free throws on back-to-back possessions to extend the lead to 57-50, but Ryan Maxwell completed a three-point play, and Jordan Maxwell added a basket to cut Pine Bluff’s lead down to 57-55 with less than one minute remaining in the game.

After a turnover by Pine Bluff, Davis pulled up a mid-range jumper to tie the game at 57-57 with 30 seconds remaining in the fourth.

Berkarion Black was fouled with 19.1 seconds left in the game and made one of the free throws to retake the lead for the Zebras.

On the next possession, Black stole the ball from Jacksonville and drove down the court, making a layup to put Pine Bluff ahead 60-57 with less than 10 seconds left in the game.

The Pine Bluff Fillies were defeated by the Jacksonville Lady Titans 63-15 on Tuesday night.

After getting off to a rough start, Jacksonville led 18-0 after the first quarter and later went ahead 34-7 at halftime.

Shy Christopher led the way in the first half for Jacksonville with 11 points.

In the second half, Christopher had some help from freshman Brooklyn Roland, who scored 10 points in the third quarter to extend the Lady Titans lead more.

In the fourth, the Fillies would outscore Jacksonville 6-3, but the damage was done, and the Zebras suffered a defeat.

Surraya Campell led the Fillies with four points in the loss. For Jacksonville, Roland led with 20 points, and Christopher added 18 points.

Higgins finished with a game-high 34 points to lead the way for Pine Bluff, and Harris added 14 points.

By Ocie B. Brown