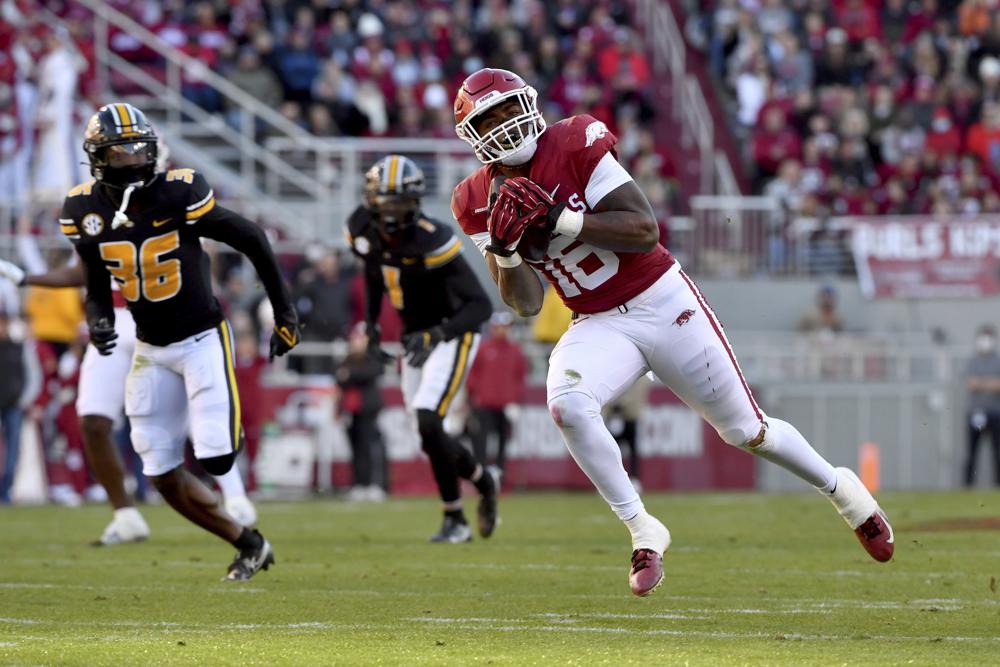 Arkansas receiver Treylon Burks (16) makes a catch in front of Missouri defensive back DJ Jackson (36) during the first half of an NCAA college football game Friday, Nov. 26, 2021, in Fayetteville, Ark. (AP Photo/Michael Woods)

FAYETTEVILLE, Ark. (AP) — Sam Pittman grinned for almost the entirety of his postgame press conference Friday night. The Arkansas coach and his team had done something no others ever had.

The No. 25 Razorbacks capped their regular season with a 34-17 victory over Missouri, snapping a five-game losing streak to the Tigers. The win also kept the Battle Line Trophy in Fayetteville and provided Arkansas a perfect 3-0 season in its trophy games.

Arkansas (8-4, 4-4 Southeastern Conference) is only two seasons removed from the worst two seasons in school history. In the previous five seasons combined, the Razorbacks hadn’t won a trophy game even once.

KJ Jefferson, in his first season as starter, led the way Friday. He threw for 262 yards and a touchdown and ran for another 58 yards to help snap the skid against Missouri. His best partner was wide receiver Treylon Burks, who had seven catches for 129 yards and the score. The junior also quarterbacked an option play on Arkansas’ final score of the game when he pitched to running back Rocket Sanders in the fourth quarter to help give the Razorbacks their most wins during the regular season since 2011.

Burks became just the fourth member of the 1,000-yard receiving club in school history. He also broke the 100-yard barrier in a single game for the sixth time this season, setting a school record. He’s also a projected first- or second-round NFL pick.

“He’s a bad man,” Pittman said. “He can do almost anything. He can catch the ball. Running better routes. He can block. … That option, wasn’t that beautiful?”

Arkansas scored on four straight drives in the second half, turning a four-point halftime lead into a 27-point lead with 9:52 to play.

Missouri (6-6, 3-5), which finished the regular season at .500 for the third straight year, managed just 316 yards of total offense, 219 of which came from running back Tyler Badie on the ground. Badie scored Missouri’s only touchdown with 1:25 left. The Tigers were largely beaten by the big play, which their offense never achieved. Arkansas averaged 8 yards per play to Missouri’s 4.2.

“They had a nice gameplan. But at some point, you’ve got to go attack that and not sit there and say ‘ we’re afraid,’” Pittman said. “We are a running team. We want to have success running. But if someone is going to take that away from you, you have to say we’re going to burn you deep.”

On back-to-back drives in the third quarter Jefferson found wide receiver De’Vion Warren for a 55-yard gain to set up the first touchdown of the half, then he connected with Burks over the top for a 52-yard score that broke open the game.

Missouri stiffened in the red zone on the third straight Arkansas scoring drive in the fourth quarter, holding the Razorbacks to a field goal. But Connor Bazelak’s pass was intercepted on the next play before Warren’s 32-yard end-around immediately put Arkansas back inside the 20. Sanders’ 7-yard touchdown run capped the scoring.

Bazelak finished 10 of 26 for 65 yards. Badie had 41 carries. He passed Devin West for Missouri’s single-season rushing record, finishing with 1,604 yards.

Sanders ran for 21 yards and two touchdowns on eight carries for Arkansas. Trelon Smith had the other score and ran for 37 yards on seven carries.

BOWL BOUND, BUT WHERE?

Arkansas last played in the postseason in 2016, squandering a 24-0 halftime lead against Virginia Tech in losing the Belk Bowl, 35-24. Pittman said he thinks the Razorbacks deserve to play in one of the upper-tier SEC bowls this time around. Three of their four losses came against No. 1 Georgia, No. 3 Alabama and No. 8 Ole Miss, which are a combined 30-3.

“Well, in the three-game losing streak we got beat by Georgia and everybody else that played them did, too. We lost to Ole Miss by one,” Pittman said. “I get it. Everybody thought the world was coming to an end. We came back, went on a run.”

Arkansas defensive coordinator Barry Odom was Missouri’s head coach before being fired after four seasons in 2019. Pittman gave his senior defensive captains the game ball and they subsequently gave it to Odom, who celebrated his 45th birthday Friday with the win.

Arkansas: Will play in a bowl for the first time since 2016.