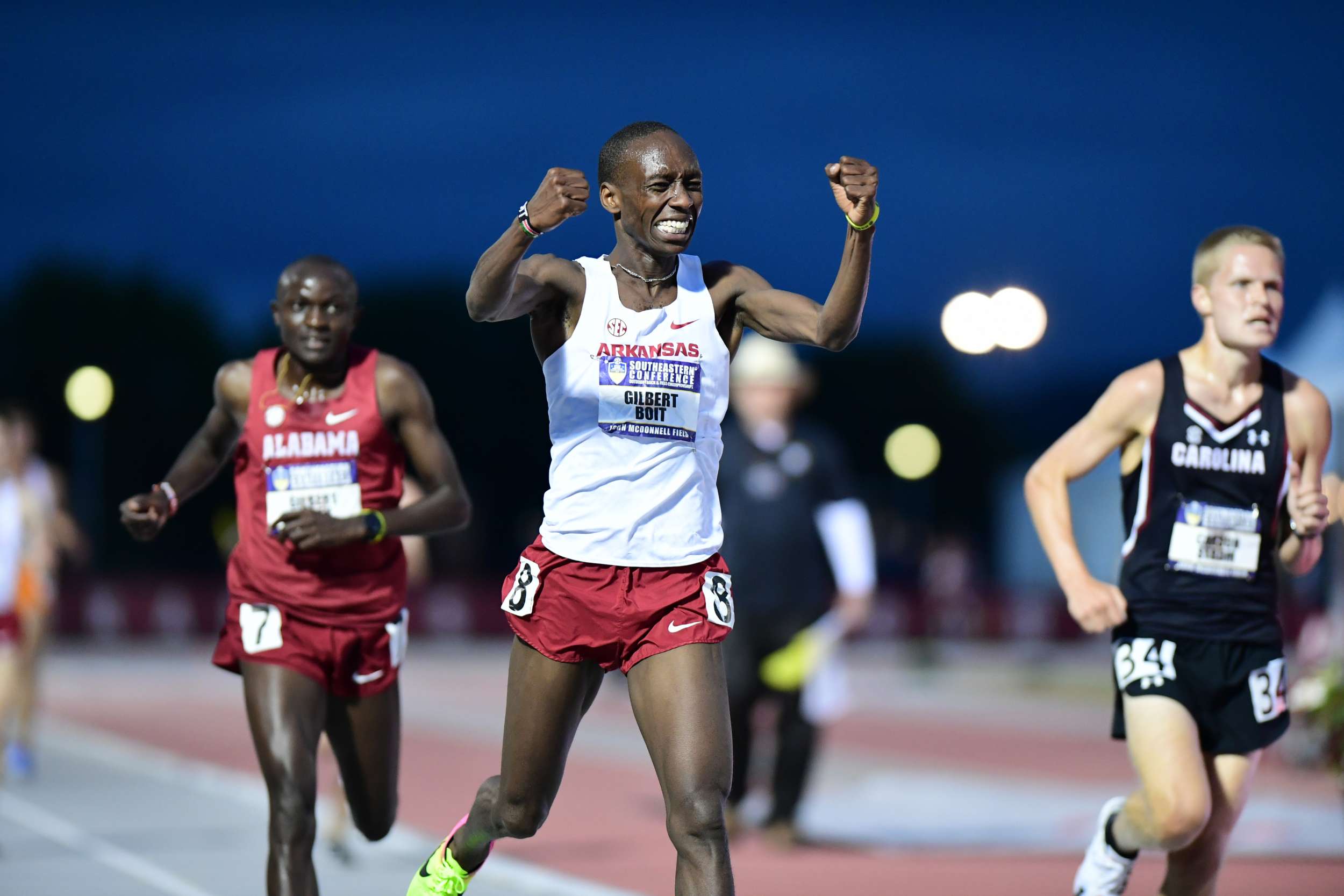 FAYETTEVILLE, Ark. – The No. 20 Arkansas men’s track and field team put together a third-place overall finish at the 2019 SEC Outdoor Track & Field Championships on Saturday night at John McDonnell Field.

The Razorbacks posted 91 points as a unit and marked eight-straight top-three finishes at the outdoor conference meet.

The finish of the 5,000-meter run brought the packed house at John McDonnell Field to its feet, as junior Gilbert Boit won the individual title with a time of 13:54.76. Coming down the final straightaway, Boit split teammate Cameron Griffith and Alabama’s Gilbert Kigen on the track and crossed the finish line in first to complete the indoor/outdoor conference 5,000-meter run sweep.

Griffith and sophomore Matt Young finished third and fourth, respectively, with times of 13:55.05 and 13:57.97. Arkansas totaled 21 points from the 5,000-meter race. Earlier in the evening, Griffith posted a second-place finish in the 1,500-meter run at 3:48.81 to earn eight points. It marks back-to-back years he’s taken the silver medal in the event, running 3:47.02 last year, and the third consecutive year to score in the run.

The 4×100-meter relay kicked things off on the track and took home bronze behind a season-best 39.26. The quartet of Josh Oglesby, Rashad Boyd, Kris Hari & Roy Ejiakuewku moved up to No. 6 among NCAA West qualifying times heading into the weekend while earning six points toward the team standings.

John Winn, Hunter Woodhall, Jalen Brown and Rhayko Schwartz comprised the 4×400-meter relay, which also finished third and posted a time of 3:03.53. The squad’s time was a season-best and moved Arkansas up to fifth among relay qualifying teams in the West Region.

Sophomore Hunter Woodhall brought home fourth in the 400-meter dash at 46.22, a personal-best, giving him five points. It’s the fastest by a Razorback this season in the event and puts him at 18th among West qualifiers this season. Later, fellow sophomore Kieran Taylor also notched a fourth-place mark in the 800-meter run with a time of 1:48.34 for another five-spot.

Junior Laquan Nairn posted a fifth-place finish in the triple jump in the afternoon portion of the day. He made the final of the event with a leap of 15.25m (50-0.5) on his third attempt, putting him in eighth. After moving down to ninth before the final round of jumps, Nairn landed in the pit at 15.68m (51-5.5) with his final mark to take fifth and pick up four points for the team.

In the 110-meter hurdles, senior Shakiel Chattoo clocked a PR and a sixth-place time at 13.71 to earn three points for the squad. His time propels him up to No. 5 in the NCAA West heading into the weekend competition. Junior Travean Caldwell took eighth in the 400-meter hurdles at 50.86 to add another point for the Razorbacks.

Postseason track & field continues with a trip to Sacramento, California, for the NCAA West Preliminary Championships on May 23-25.