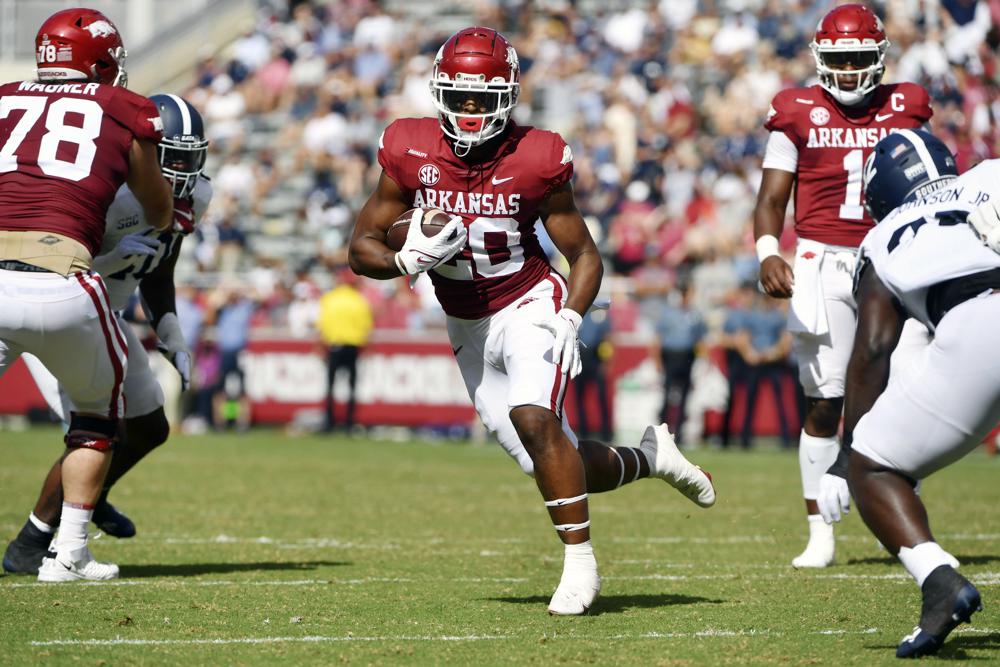 Arkansas running back Dominique Johnson (20) finds a hole in the Georgia Southern defense as he runs for a touchdown during the first half of an NCAA college football game Saturday, Sept. 18, 2021, in Fayetteville, Ark. (AP Photo/Michael Woods)

FAYETTEVILLE, Ark. (AP) — A week after beating then-No. 15 Texas and a week before facing No. 5 Texas A&M, both age-old rivals, No. 20 Arkansas could have faltered against Georgia Southern.

After all, the Razorbacks, who haven’t had a winning season in five years, only beat the last Sun Belt team it played by a single point. The one before that actually beat Arkansas at home.

No such disappointment this time as coach Sam Pittman’s team smashed the Eagles 45-10 on Saturday behind quarterback KJ Jefferson, who threw for a career-high 366 yards and tied a career high with three touchdowns

The win sets up a showdown with the Aggies next week in Arlington, Texas, where both teams will enter perfect.

“We played them last year, they were the best football team we had played at that time,” Arkansas coach Sam Pittman said. “It’s a big deal.”

Jefferson and the Razorbacks defense were the biggest reasons for the blowout. Jefferson set his career high in passing by the first drive of the third quarter. A 60-yard touchdown pass to Warren Johnson gave him 275 yards, one more than his previous high, and gave Arkansas a 31-10 lead with 13:28 left in the period. On Arkansas’ next offensive play, Jefferson connected with preseason All-SEC wide receiver Treylon Burks for a 91-yard score.

At that point, the Razorbacks (3-0) were comfortable, shifting largely to the No. 9 rushing attack in FBS to slow the game and preserve the win. Jefferson, who entered as the No. 2 rushing quarterback in the SEC, spent more time on his passing instead, something his coach was happy to see improve. He entered the game with just 266 yards over the team’s first two games.

“Every time he misses a throw it’s like, ‘Oh my gosh!’ in my mind. Then he throws one that goes 91,” Pittman said. “What else is he supposed to do? I think Dan Marino missed a pass one time, so my mind has got to work a little bit different.”

The Arkansas defense was just as good. Georgia Southern finished with 233 yards of total offense, and 76 came on one play. Eagles quarterback Justin Tomlin scored the only Georgia Southern touchdown midway through the second quarter when he scrambled into the open field on third-and-long and raced touched to the end zone. To that point, Arkansas had allowed only 39 yards of total offense.

Jefferson threw his first touchdown pass to Tyson Morris, a 14-yarder to cap a seven-play, 99-yard drive, just before Tomlin’s long run. Before that, Trelon Smith scored from 14 yards on Arkansas’ first drive of the game and Dominique Johnson scored from the 11 on the second drive for a 14-0 lead.

Jefferson, who was replaced by redshirt freshman Malik Hornsby early in the fourth quarter, finished 13-of-23 passing for 366 yards with no interceptions. Hornsby scored on a 6-yard run midway through the quarter and was replaced by Stephen Jones, the grandson of Dallas Cowboys owner Jerry Jones.

The last time Arkansas played three quarterbacks in a game was in 2019 when Arkansas couldn’t find a consistent starter and played five different players at the position en route to a 2-10 season. Pittman was hired to replace Chad Morris the next year.

This time it was a positive sign, not a negative one.

“We have not had that situation since I’ve been here,” Pittman said. “That was foreign territory. Get so-and-so into the game or, more importantly, get someone out of the game. I was proud of that.”

Arkansas entered as the No. 9 rushing attack in FBS, averaging 289 yards a game. The Razorbacks finished with 269 yards coming from nine different ball carriers. Johnson led with 72 yards on five runs.

Jefferson’s 91-yard touchdown pass to Burks was the second-longest scoring pass in school history, just one yard short of Matt Jones’ 92-yard throw to Richard Smith against Tennessee in 2002.

Arkansas and Texas A&M will meet next week as unbeaten and ranked opponents for the first time since 2016. The Aggies won that game 45-24.

Arkansas: The Razorbacks did what they needed to do to stay unbeaten going into SEC play, where they will be tested to see how they stack up with the top teams.

Georgia Southern: Its lone win this season came against FCS opponent Gardner-Webb. The Eagles have scored a combined 16 points against Arkansas and Week 2 opponent Florida Atlantic.

Arkansas travels to Arlington, Texas, for its yearly game against Texas A&M. The Aggies have won nine straight in the series.