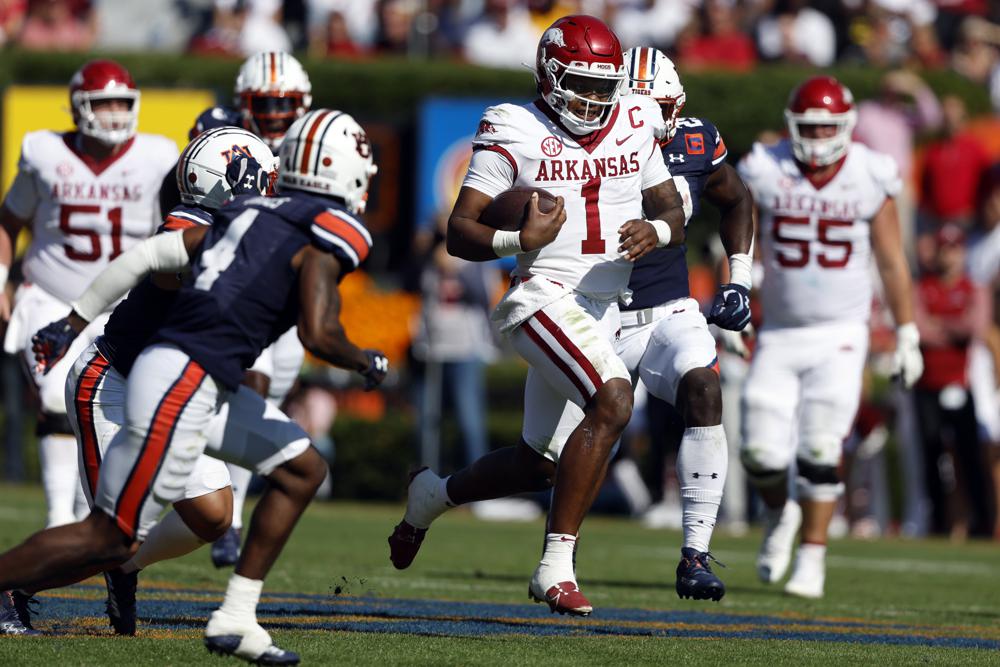 Arkansas quarterback KJ Jefferson (1) carries the ball for a first down against Auburn during the second half of an NCAA college football game Saturday, Oct. 29, 2022, in Auburn, Ala. (AP Photo/Butch Dill)

FAYETTEVILLE, Ark. (AP) — If recent history holds true, fans who brave projected below-freezing temperatures Saturday night at Razorback Stadium may be in store for a thriller when Arkansas and Mississippi meet.

In last year’s game, the Razorbacks and Rebels went back-and-forth, scoring a combined 41 points in the fourth quarter. The game ended on a failed two-point conversion by Arkansas with no time left on the clock.

“That game was very competitive,” Ole Miss coach Lane Kiffin said. “It could have gone either way.”

A loss for either team will guarantee a worse conference record than last year. Kiffin is tossing aside Arkansas’ 2-4 conference mark this year, especially after watching the Hogs take No. 7 LSU down to the wire last week.

“A really talented team that really in a lot of ways outplayed LSU Saturday and really had a bunch of chances with backup quarterbacks to beat LSU,” Kiffin said. “That tells you a lot about how good they play at times.”

Three of Arkansas’ five losses this year have been by three or fewer points.

“We haven’t been able to win the close games this year,” coach Sam Pittman said. “We have to figure out how to do that every year or the record is going to go from nine to 10 wins to five to six wins.”

With a win in either of the Hogs’ final two games, Pittman would become Arkansas’ fourth coach to earn bowl eligibility in each of his first three seasons.

“We’re disappointed with where we are,” he said. “I think you’ll see a team on Saturday that wants to get bowl eligible.”

Meanwhile, the Rebels are also on the heels of a heartbreaking loss to Alabama. The Crimson Tide scored 13 unanswered points to rally for a 30-24 win, giving the SEC West crown to LSU.

FAN OF THE FREEZE

When Arkansas and LSU kicked off at 11 a.m. local time last Saturday in Fayetteville, it was 34 degrees after a snowy Friday night.

The weather wasn’t quite cold enough for Pittman’s liking.

“I hope it’s colder than last weekend,” Pittman said. “The weather probably did impact the scoring last week. The colder the better. We’re rooting for a freeze-out if we can get it.”

The temperature at kickoff this week is projected to be 30 degrees. If the forecast models hold true, it would be coldest game played in Fayetteville since Nov. 2, 1991.

Kiffin could do without the chilly climate and has taken precaution.

“I have cold-weather isssues, but luckily I don’t think our players do, because I don’t see that out there at all,” he said. “I’ve been in contact with Realtree, and they’re sending me multiple hunting gear for underneath. So, I’ll be prepared.”

Arkansas quarterback KJ Jefferson missed the LSU game due to injury, and Arkansas posted a season-low 249 yards of total offense without him. Pittman said he expects Jefferson to be ready to play Saturday, so the Rebels have been preparing to face him.

“I feel like Sam doesn’t play a lot of games in the media,” Kiffin said. “He just kind of says what it is with injuries and stuff. I think he’s been pretty open, and they expect him back.”

Jefferson remains one of two SEC quarterbacks with 15 passing scores and at least five rushing touchdowns, despite missing two games this year.

Ole Miss freshman running back Quinshon Judkins is just 142 yards shy of the school’s 73-year-old single-season rushing mark. He leads the SEC with 1,171 rushing yards, including 704 after contact. Fullback Kayo Dottley has held the school’secord of 1,312 yards since 1949.

Judkins also has a school-record 15 touchdowns on the ground.

In an era of high-powered passing games, these two teams are among the nation’s best running teams. Ole Miss leads the SEC and ranks third nationally with an average of 259.8 yards a game. Arkansas is third in the SEC and 12th in the country, running for 222.1 yards a game.

Arkansas senior linebacker Drew Sanders tops the SEC with 8.5 sacks. Against LSU last week, he had a game-high 12 tackles to go along with a sack. He was named to The Associated Press midseason All-America team and is a semifinalist for both the Butkus and Chuck Bednarik Awards.