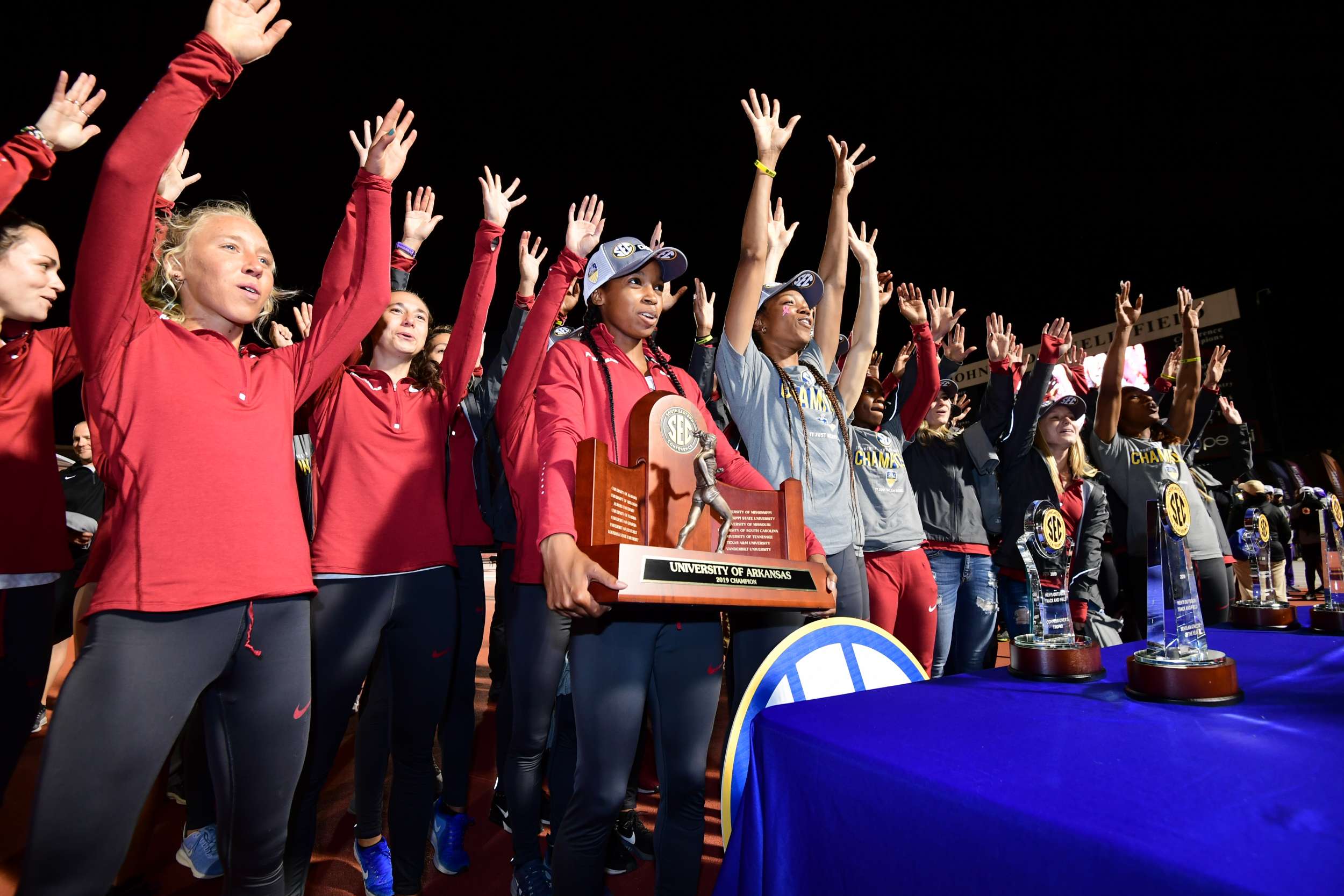 FAYETTEVILLE, Ark. – For the eighth time in school history, the Arkansas women’s track & field team claimed the Southeastern Conference Outdoor Championship, doing so for the first time at home at John McDonnell Field in Fayetteville.

The No. 1 Razorbacks accumulated an impressive 139.5 points to take the conference crown and complete the seventh triple crown in program history. The title also marks the 15th SEC championship in the last 16 attempts across cross country, indoor track & field and outdoor track & field.

Arkansas finished the meet with five event champions, four coming on the final day of competition.

The 4×100-meter relay team started the running events with a bang, putting together a school record 43.11 to set the tone for the evening. The Razorbacks held a lead after Kiara Parker & Payton Chadwick made up the stagger and Janeek Brown handed off to Kethlin Campbell on the final straightway, but Campbell couldn’t hold on with LSU in the next lane to earn a runner-up finish.

Their time was the third fastest among NCAA West qualifying teams this season and passes the previous school record set in 2018 of 43.26, which Parker and Brown ran first and third legs on, respectively.

Brown & Chadwick swept the top two spots in the 100-meter hurdles, claiming 18 points for the Razorbacks. Brown blazed over the hurdles for a personal-best and facility record 12.55 to take the title, breaking her own school record to give her the No. 1 time in the world in 2019. With the performance, she became the fifth-best performer in collegiate history and her 12.55 equaled the No. 7 performance all-time among the collegiate ranks.

A lane to Brown’s right, Chadwick stayed on her hip throughout the race and recorded a PR at 12.70, giving Arkansas the top two marks in the West so far this season. Chadwick bested Brown later in the night in the 200-meter dash, as Chadwick tallied an outdoor-best 23.08 for fourth, while Brown came in fifth at 23.12, picking up an extra nine points from the event while also giving Chadwick the No. 14 time in the West.

Not to be outdone by her other relay members, Campbell returned for the 400-meter dash and won the individual championship with a personal-best 51.03 from lane eight. The mark smashed her previous PR of 51.83 set at the LSU Alumni Gold meet earlier this year on April 20, and kept her atop the leaderboard among West qualifiers.

To cap another impressive SEC meet, the 4×400-meter relay team recorded a season-best 3:29.22, as well as the fifth fastest time in school history, to win the championship. Paris Peoples and Parker put together a strong first two legs, then Chadwick took their progress and moved into the lead before handing off to Campbell, who barreled around the track and brought home the gold for the Razorbacks and improved their fastest time in the West in the event.

Five Razorbacks scored in the 1,500-meter run, with junior Carina Viljoen leading the charge with a second-place finish at 4:17.81, just edged out at the line by 0.52 seconds. Werner and Gregory paced the group for the first three laps of the event, crossing the finish line at 4:20.40 & 4:21.04, respectively, to finish fourth and fifth. Two more Hogs followed shortly behind in senior Sydney Brown (4:21.83) and freshman Meghan Underwood (4:23.68) to give Arkansas a combined 22 points in the event.

In the 100-meter dash, Parker, the final Razorback of the 4×100-meter relay quartet, posted a third-place time at 11.19, giving her a season-best mark with a wind just above the legal limit at +2.1.

Postseason track & field continues with a trip to Sacramento, California, for the NCAA West Preliminary Championships on May 23-25.