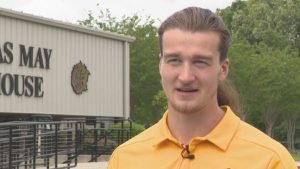 PINE BLUFF, Ark., Former University of Arkansas at Pine Bluff punter Jamie Gillan may not have been selected in the 2019 NFL Draft, but he’ll get a chance to show what he’s capable of at the next level.
The 6-1, 207 pound punter signed a free-agent contract with the Cleveland Browns on Saturday evening, ensuring the Scotland native will continue his quest to play in the National Football League after leaving a lasting impression with the Browns during a private pre-draft workout.

“The impact he made from the punter position is truly amazing,” UAPB head coach Cedric Thomas said.  “He’s not only a player from a leadership standpoint, as Jamie was the first one on the field and the last one in the weight room.  He is a football player who helped lay the foundation of what we are building for our program. He will always be welcomed here at UAPB, and we know he will perform well.”
Gillan was a highly sought-after specialist and will begin his career with the Browns.  In his college career, Gillan, handled kickoff, punt, field goal and extra point duties for the Golden Lions.

In 2018, Gillan led the SWAC with an average of 42.9 yards per punt to rank 13th in FCS football with a net average of 37.5 yards.  A total of 19 punts traveled more than 50 yards, and 27 of his punts were down inside the opponents’ 20-yard line.  Gillan also had 31 touchbacks, which ranked 16th nationally and allowed only 17.4 yards per return.