Left-hander CC Sabathia, who is entering his 19th major league season, formally announced Saturday that he’ll retiring at the end of 2019. Sabathia said at the start of his news conference at the New York Yankees’ spring training complex: “I just wanted to make this announcement that 2019 is my final season.” The 38-year-old emotionally credited his mother and wife and his late father for his successful career.

In 2009 — Sabathia’s first year in pinstripes — the Yankees won their 27th championship. He’s hoping to be sent out this year with No. 28. Recent knee trouble and a desire to be home with his wife and growing children were factors in Sabathia’s retirement plans.

Sabathia’s retirement comes after he spent recent seasons adjusting his pitching style in order to continue being effective. Injuries, noticeably flare-ups with arthritic inflammation in his right knee, have also slowed Sabathia since 2014.

Despite that, Sabathia is just 14 strikeouts away from joining the 3,000-strikeout club. He’s also four wins away from becoming the 14th player with 3,000 career strikeouts and 250 career wins. 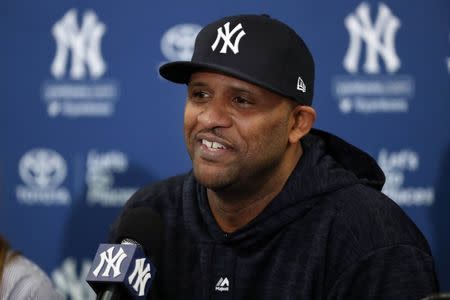