The New Jersey Devils introduced No. 1 overall pick Jack Hughes on Tuesday.  General manager Ray Shero said: “Adding a talent like Jack Hughes on Friday night and Saturday, P.K. Subban, obviously I think the Devils are back in business.”

By winning the draft lottery in early April the team selected Hughes, a center, with the top pick Friday to the trade for Subban, who immediately steps into the role as New Jersey’s top defenseman. “Jack joining the franchise represents another turn in our goal to be elite,” Harris said at a news conference for Hughes at the Prudential Center. “We said that we’re here not to do anything other than consistently compete and ultimately win the Stanley Cup.” 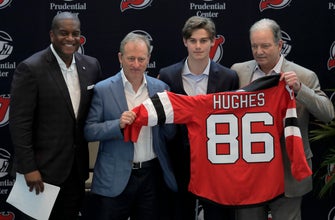 Via www.foxsports.com
The Devils introduce No. 1 overall pick Jack Hughes to New Jersey after a wild weekend
06/25/2019 3:15 PM