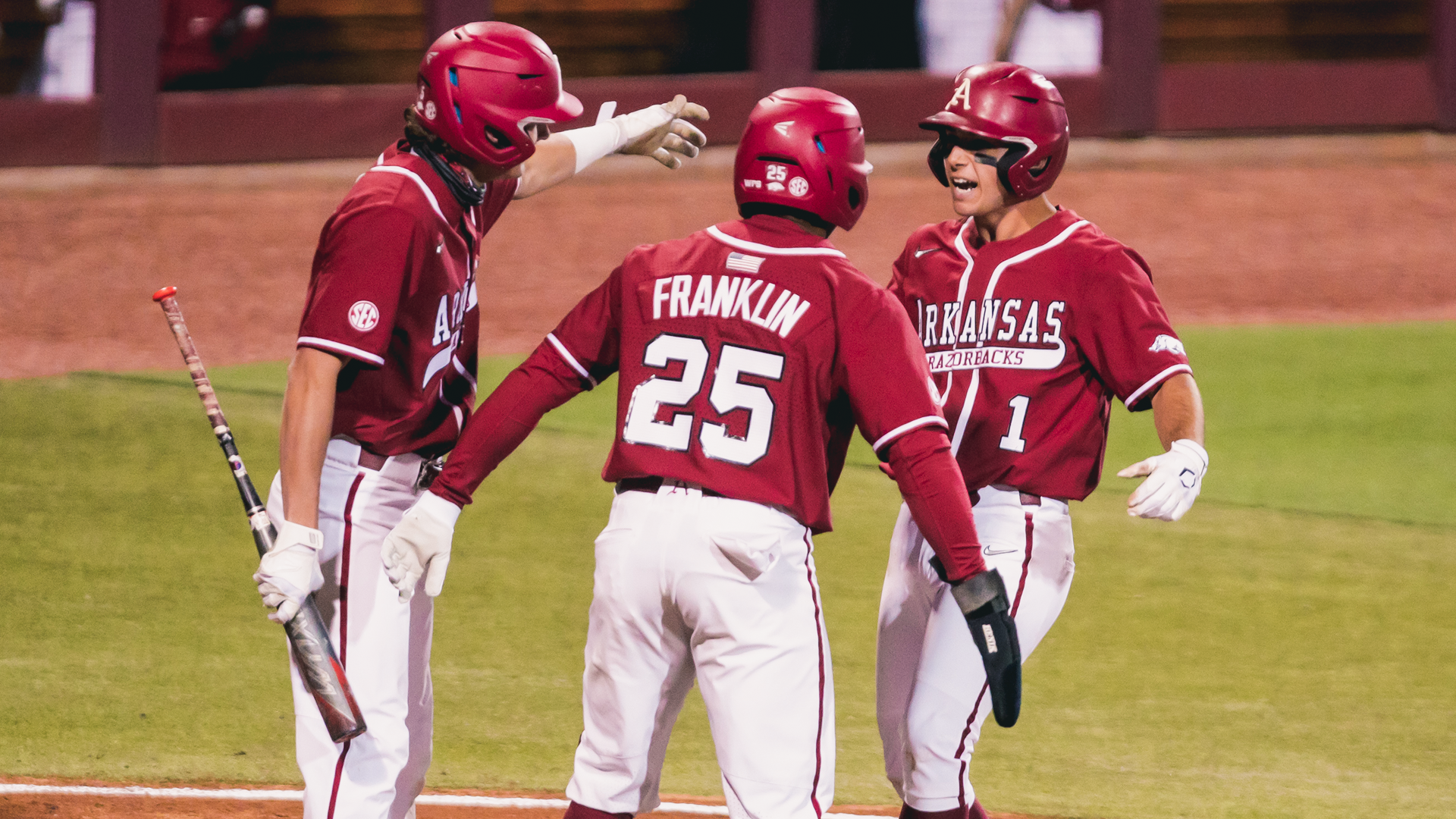 COLUMBIA, S.C. – Robert Moore let his bat do the talking.

Heckled by a rowdy crowd all night long at Founders Park, the Razorback second baseman responded with two home runs, including the game-winning two-run blast in the seventh inning, powering No. 1 Arkansas to a 6-1 series-opening win against No. 11 South Carolina on Thursday evening.

Four Hog pitchers came together in the win to twirl Arkansas’ fourth two-hitter of the season. Caleb Bolden, Ryan Costeiu, Caden Monke and Kevin Kopps combined to allow one run on two hits and four walks while striking out 10 in total.

The unanimously top-ranked Hogs improve to 31-6 overall, including 12-4 in conference play, on the year with the victory. Arkansas, in sole possession of first place in the SEC West, now leads second-place Mississippi State by 1.5 games.

Moore’s first of two dingers came in the second inning. His two-out, first-pitch blast to right center put the Hogs ahead, 1-0.

The Gamecocks tied the ballgame at one in the bottom of the fourth, driving Bolden from the game after his 3.1 innings of work. The Hog starter allowed the only run scored against Arkansas on the night, limiting South Carolina to two hits and three walks while punching out two.

Bolden turned the game over to the Razorback bullpen, and it was pure dominance the rest of the way. Costeiu worked 1.2 scoreless frames out of the pen, striking out two while walking one.

Monke entered the game in the sixth and tossed a hitless inning before giving way to Kopps. The right-hander continued his incredible season, retiring all nine batters he faced.

Kopps threw 34 pitches in three innings, racking up six strikeouts along the way. He came within one pitch of an immaculate inning, striking out the first two batters he faced on three pitches each before inducing a two-strike groundout to finish his opening frame.

While the Hog bullpen shoved, Moore continued to rake.

His second home run of the evening turned out to be the game-winner. The Leawood, Kan., native launched a two-run shot to right in the top of the seventh, putting Arkansas up, 3-1, with his 10th tater of the year.

The Razorbacks added one more in the seventh before scoring once in both the top of the eighth and ninth innings, extending their advantage to five runs. Kopps closed the game out, sealing Arkansas’ 6-1 win while securing his fifth save of the year.

The Hogs will play two tomorrow due to impending inclement weather expected in Soda City on Saturday. Arkansas’ third doubleheader in as many weeks is set to begin at 1 p.m. CT Friday, April 24, followed by game two at 6 p.m. CT.