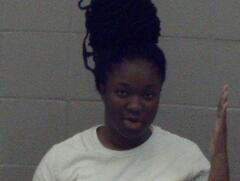 Jerrineka Titus will have to post a $10,000 bond to be released from the adult detention center after Jefferson County District Judge Kim Bridgforth ruled prosecutors have probable cause to charge her with furnishing or possessing prohibited articles.

Deputy Prosecutor Mirsha King told the court the circumstances that led to the arrest.

Titus said she would hire her own attorney and was told to come back to court Nov. 12.