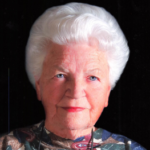 Mary was born July 12, 1923 to Minnie Farrell and Abner Sidney Allen in Fink, Texas (also known as “Georgetown”). Her father had the only general store in the community and by the age of ten “Mickie” was managing the store alone on Saturdays when her parents “went to town”. She learned of politics and life by hiding under the counter and listening to the old men gossip around the potbellied stove. She was known to be a great politician and many locals asked her to hand out their cards and campaign for them at the general store. She selected her candidates carefully because they always won.

In 1943, during WW2, Mary moved to Dallas to work in the big Sears store as a secretary. It was there she met and married Army Lt. Jack King. Mary became a military wife for the next 25 years. Her husband served during three wars: WW2, the Korean War and the Viet Nam War. She moved over 40 times including Germany (twice), Japan and all over the United States.

In 1946, when WW2 was just ended and the fighting soldiers were being moved back to the US, Mary was on the second ship of wives to move to Germany to be with their husbands. She told of the band playing “Gonna Take A Sentimental Journey” as the ship departed for Berlin. In Germany, the wives were given leftover casket material to make curtains and bedspreads. They were not allowed to publicly hold hands with their husbands because it would appear that a US soldier was fraternizing with the enemy.

In between two stints in the Army, Jack went to seminary and became an ordained Baptist minister. Mary was now an Army wife and a preacher’s wife.

In 1959 with two children, Mary and Jack settled in Arkadelphia, Arkansas. Lt. Col. King became the professor of Military Science at Ouachita Baptist University. Mary began her 50 years of service at First Baptist Church in Arkadelphia.

Mary was a professional Girl Scout, the Director of Clark County United Way, an Amway Distributer and a professional cake decorator. Mary loved nothing more than working for others. She cleaned the closets at the church, she swept the Feaster Trail behind her house until she was 90 and she loved to drop by and visit her friends.

In a book “Voices of the Faithful”, the author, who was one of Mary’s G.A.’s dedicates the book to her and says of her tireless work with the girls: “For lighting the fire. You didn’t know we were listening, did you?”

Mary will be remembered for her “can-do” attitude. She never asked anyone to do anything she would not be willing to do herself. She did not take “no” for an answer. Her life verse was Matthew 7:7, “Ask and it shall be given, Seek and ye shall find, Knock and it shall be open to you.” It was a very proactive verse, just like Mary.

Burial will take place at Arkansas State Veterans Cemetery in North Little Rock where her husband is already buried, by Robinson-Fuller White Hall. Due to the Covid-19 restrictions, there will be no other services.