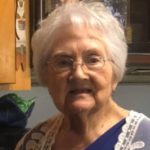 Mary Catherine Chlotiel Work, 88, of Mansfield, LA, formerly of Pine Bluff, AR is now walking with Jesus in her Beulah Land on March 19, 2020. Born July 21, 1931 in Fordyce, Arkansas, she was the daughter of the late Ralph Emerson Bragdon and Mayme Merle Lowe Bragdon.

Mrs. Work was a faithful attending member First Assembly of God in Pine Bluff, Arkansas until moving to Louisiana in the early 1990s. She then became a faithful member of New Life Assembly of God Church, a charter member of the Desoto Quilters Guild and a member of Friends of the Library in Mansfield.

Burial will be private.