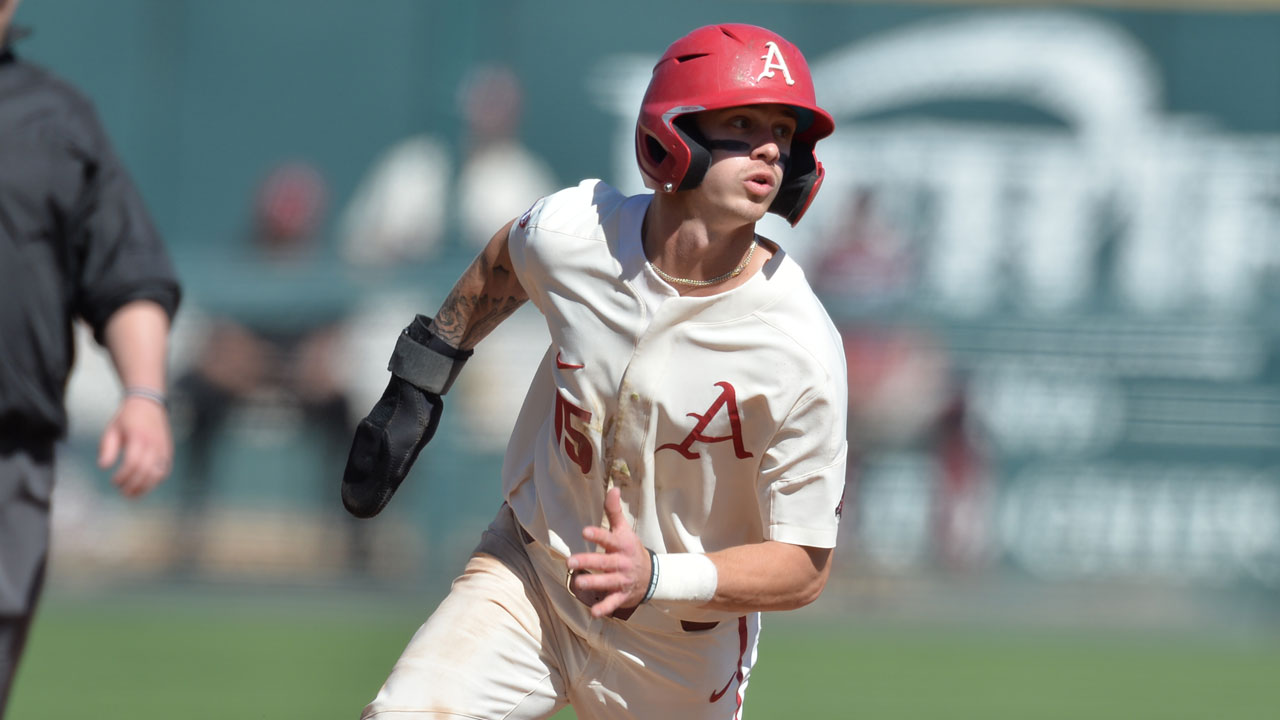 FAYETTEVILLE, Ark. – Following last week’s sweep of No. 2 Mississippi State where Arkansas outscored the Bulldogs, 27-10, and now sit atop the SEC Western Division, sophomore Casey Martin was named the Southeastern Conference’s Player of the Week. Freshman right-hander Connor Noland also took home the league’s Co-Freshman of the Week honors. The pair led the Hogs to a 4-0 record for the week and are now 30-10 on the year and 12-6 in league play.

Casey Martin | Player of the Week

Martin hit .471 for the week with five of his eight hits and six of his 10 RBIs coming against the second-ranked Bulldogs. His performance helped Arkansas to its second SEC series sweep and second sweep over Mississippi State in the last three years. He also totaled a career-high four RBIs twice, once coming in the 16-4 win over Arkansas-Pine Bluff and the other in a 12-5 series-clinching victory over MSU.

The Lonoke, Arkansas native takes a five-game hitting streak into this week’s midweek series against Northwestern State and he has at least one hit in 15 of his last 17 games with a .391 average over his last 10 games with eight extra-base hits and 11 RBIs.

On Friday, Martin hit his first career grand slam, his eighth home run of the year, to help the Hogs earn an important series victory over the Bulldogs. He finished the game 2-for-3 and also tied a career-high with three walks.

Martin now has 17 doubles on the year and is tied for the SEC lead in the category with MSU’s Jake Mangum and teammate Dominic Fletcher. He is also fourth in the SEC in total bases (97).

Connor Noland | Co-Freshman of the Week

Noland had his best week as a Razorback, earning his first two wins of the year after throwing two scoreless frames against Arkansas-Pine Bluff and 7.2 scoreless against No. 2 Mississippi State. The win over MSU on Saturday helped Arkansas take control of first place in the SEC Western Division as it now leads by a half-game over Texas A&M.

The 7.2 innings pitched on Saturday was a season-long as he struck out five batters and scattered four hits without giving up a walk. The five strikeouts were his second-most in a game this year, two shy of his season high of seven coming in his first career outing in February (vs. EIU – Feb. 16).

Up Next
Arkansas continues the homestand next Tuesday and Wednesday as it welcomes Northwestern State to Baum-Walker Stadium for a two-game series. First pitch on Tuesday is set for 6:30 p.m., followed by game two on Wednesday at 3 p.m. Both games will be televised online on SEC Network+.