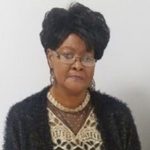 Lillie attended and graduated from Reed School, where she was a member of the School Band.  She was a skilled player, she not only played the clarinet but also the baritone Saxophone.  She also attended to Capital City Business College in Pine Bluff, Arkansas.

Lille was preceded in death by her parents; Nathaniel and Lillie Ruth Smith and a brother Leroy Smith.