University of Arkansas at Monticello golfer Leah Rowe, earned a first place finish Tuesday after shooting a 74(+3) on day two and finishing with a score of 151. 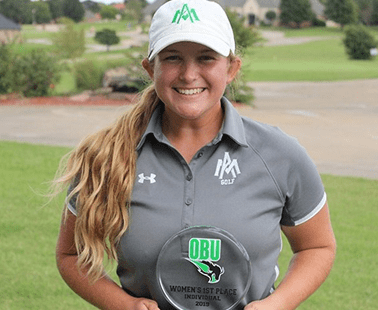 Rowe shot 77 and was tied for third on day one. On day two, she outlasted Redlands Community College’s Elizabeth Leslie who shot a 78 on day one and a 74 on day two.

“I am so proud of Leah,” said UAM head coach Adam Buie. “She could have easily given up after what happened to her in Kansas City at the Preview Tournament, but she worked hard and got redemption this week with a win. She has come so far in the -plus year I’ve been here due to her hard work and dedication.”

Rowe joins UAM men’s golfer Andrew Pearson as the only UAM golfers this season to finish in the top three.  Earlier this month in the Great American Conference Preview tournament at the Lake Hefner Golf Course in Oklahoma City, Oklahoma. Pearson started round three in 15th, he shot a 67 (-5) bumping him to tie for third. In round one, he posted a score of 71 (-1) and in round two he tallied a 72 (E). 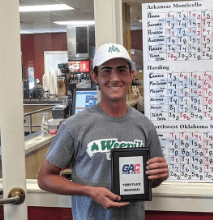 BLOSSOM FALL IN FIRST ROUND OF GAC TOURNAMENT