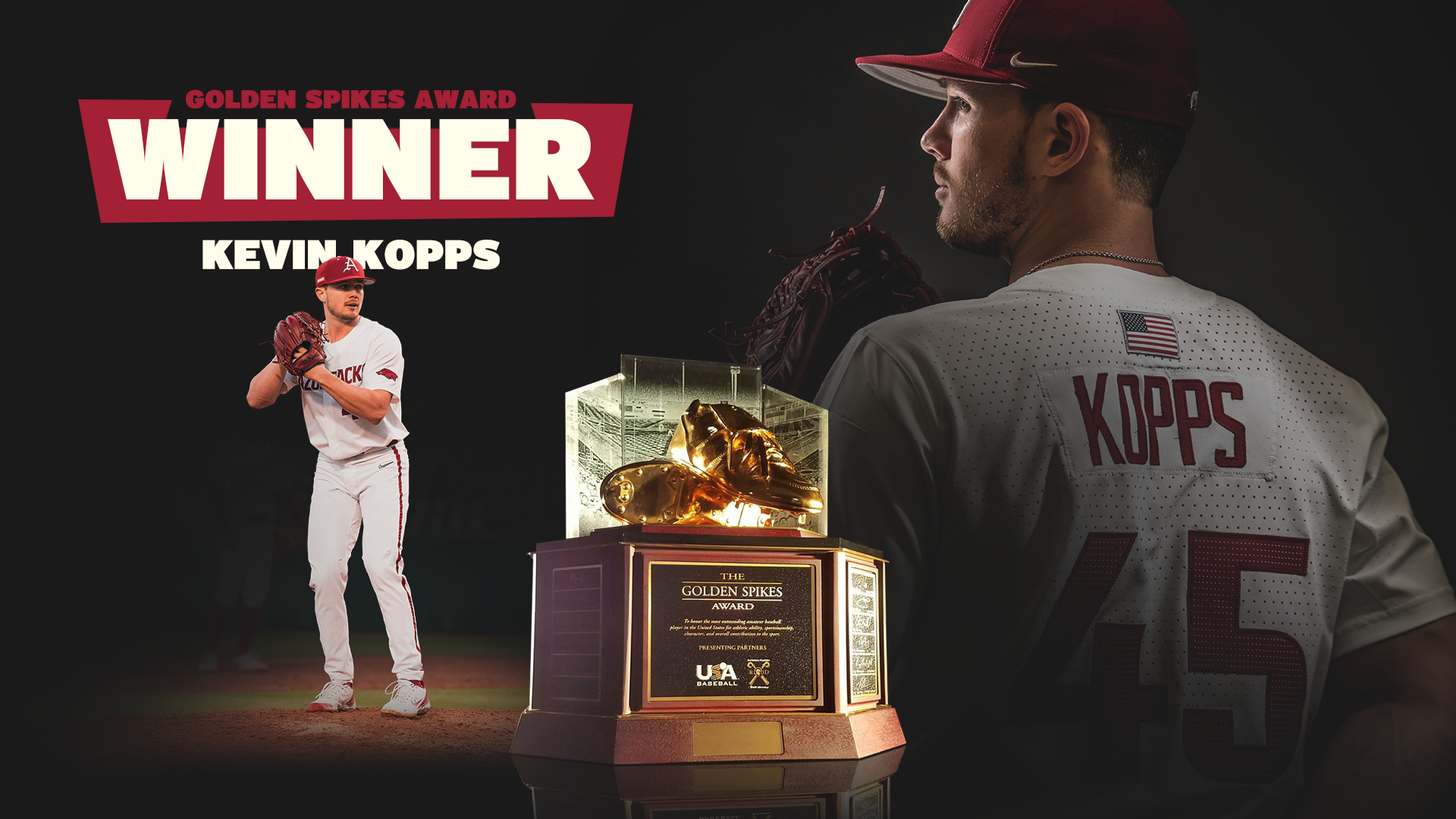 The Razorback star was named the winner of the 43rd Golden Spikes Award, presented by USA Baseball, Thursday evening on ESPN’s SportsCenter. Kopps is the second student-athlete from Arkansas to win the award, joining former Razorback outfielder Andrew Benintendi (2015).

The Golden Spikes Award, considered the most prestigious among college baseball’s national player of the year honors, recognizes the top amateur baseball player in the United States based on their athletic ability, sportsmanship, character, and overall contribution to the sport.

As the game’s most dominant pitcher, Kopps finished the 2021 campaign with a 12-1 record and 11 saves. He posted the nation’s lowest ERA (0.90) and WHIP (0.76), striking out 131 in 89 2/3 innings of work. Opposing hitters had a .162 batting average against the right-hander, who set the program’s single-season record for ERA during his historic year.

Kopps, who was selected by the San Diego Padres in the third round (No. 99 overall) of the 2021 MLB Draft, took home just about every major award in college baseball this past season. The Sugar Land, Texas, native won the Dick Howser Trophy and was named the SEC Pitcher of the Year as well as National Player of the Year by Collegiate Baseball and D1Baseball.

Kopps is the 20th student-athlete in college baseball history to win the Golden Spikes Award alongside the Dick Howser Trophy, which is considered the Heisman Trophy of college baseball. Benintendi also won both in 2015.

Arkansas is one of five schools, along with Arizona State (3), Cal State Fullerton (3), Florida State (4) and San Diego State (2), to have multiple Golden Spikes Award winners. Arkansas is only one of two schools, along with Florida State (2), to have multiple student-athletes who have won the Dick Howser Trophy and Golden Spikes Award in the same year.

2021 marked just the second year in the history of the Golden Spikes Award that the finalists (Kopps and Vanderbilt’s Kumar Rocker and Jack Leiter) hailed from the same conference. All four finalists for the award in 2015 also suited up in the SEC (Benintendi, LSU’s Alex Bregman and Vanderbilt’s Carson Fulmer and Dansby Swanson). Additionally, this year was only the second time ever that all the finalists for the award were pitchers (2011).