LUBBOCK, Texas – A quick glance at Kevin Kopps’ season statistics shows a pitcher who was a consistent force every time he hit the mound. But, with Kopps, statistics are only half the story.

His statistics would be stellar for any starting pitcher, only Kopps was not a starter for the No. 1-ranked Arkansas Razorbacks. He was their closer and the most dominant pitcher in the country in 2021, starter or reliever.

When the Razorbacks needed to stop an opponent rally or nail down a victory – whether it was a one-inning save or something longer, head coach Dave Van Horn picked up the phone and “Called the Kopps.” And the redshirt senior responded every time, leading Arkansas to a Southeastern Conference championship and the No. 1 overall seed in the NCAA tournament.

His dominant season was a big reason the Razorbacks spent the majority of the season as the No.1-ranked team in the country in every poll. It’s also the reason he is this year’s selection as the National College Pitcher of the Year.

“Kevin is the embodiment of the National Pitcher of the Year,” said Chris Snead, award co-chairman. “He was dominant on the mound all season and the leader on one of college baseball’s best teams.” 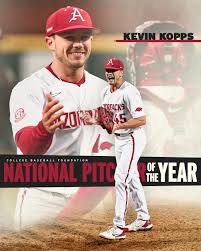 The award will be presented later this month by the College Baseball Foundation during the annual Night of Champions celebration, which will be held virtually this year and debut June 26.

Possessing an outstanding fastball and almost unhittable off-speed pitches, Kopps was a force every time he hit the mound. He had a part in the decision in 24 of his 33 appearances on the year, compiling a 12-1 record and 0.90 ERA with 11 saves.

In 89.2 innings, Kopps allowed just nine total runs and 18 walks while striking out 131 batters and holding opponents to a .162 batting average. Entering the Super Regional against North Carolina State, Kopps had held teams scoreless in 25 of his 31 appearances.

“From February all the way into June, Kevin was outstanding for the Razorbacks,” said award co-chairman Brian Melakian. “His consistently excellent performances against great opposing lineups earned him the 2021 National Pitcher of the Year Award.”