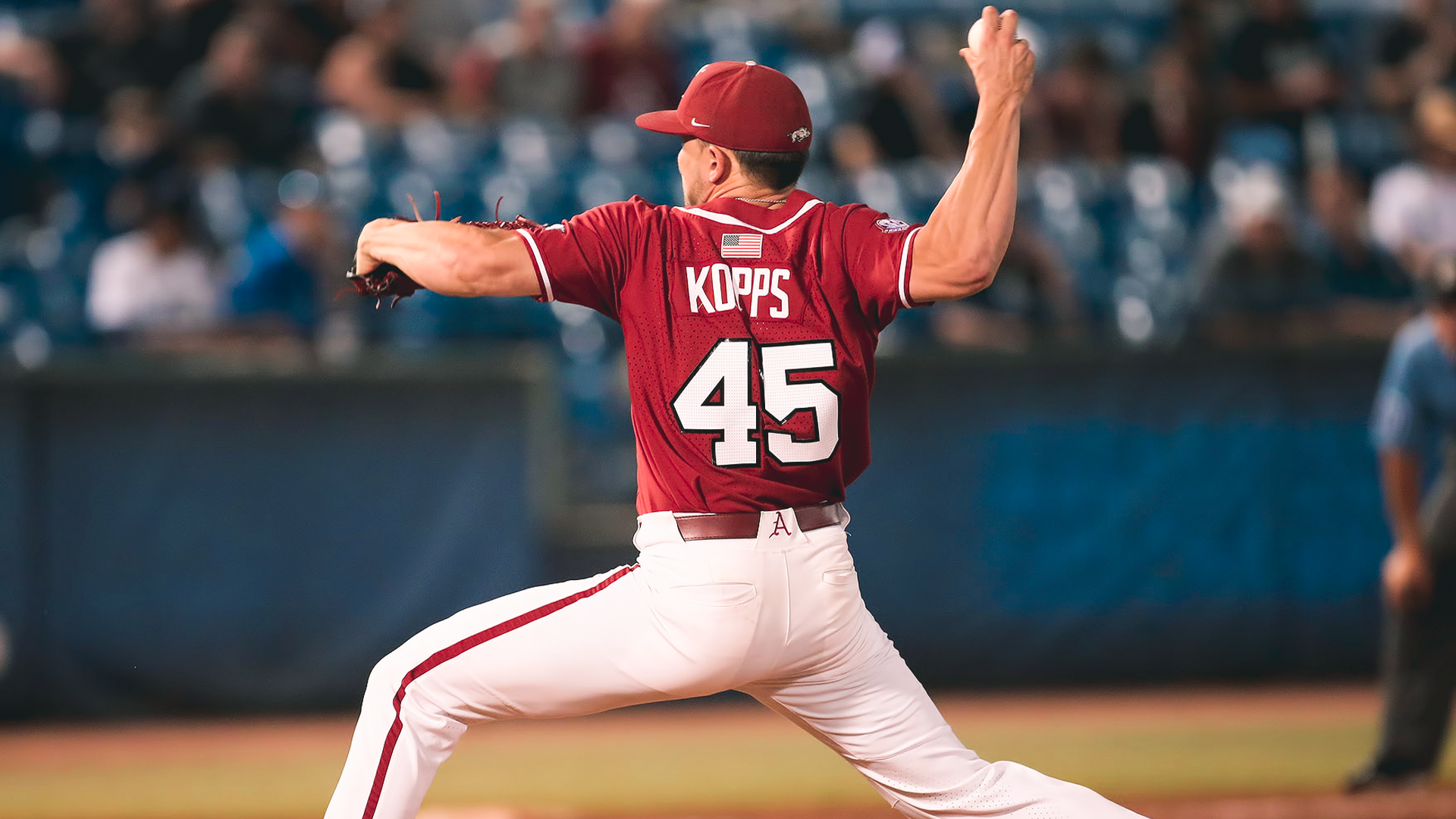 HOOVER, Ala. – The nation’s most dominant pitcher looked every bit of it Thursday night.

Kevin Kopps struck out five in three scoreless innings of relief to lock down No. 1 Arkansas’ 6-4 win against No. 3 Vanderbilt in the third round of the SEC Tournament at Hoover Metropolitan Stadium in Hoover, Ala.

The top-seeded Razorbacks, now 44-10 overall on the year, have Friday off and will play the winner of Vanderbilt–Ole Miss in Saturday’s single-elimination semifinals. First pitch is set for 3:30 p.m. on the SEC Network.

In a game that was billed as a battle of the aces, it was Kopps who stole the show. The SEC Pitcher of the Year earned his ninth save in the effort, lowering his nation-best ERA to 0.71 and eclipsing 100 strikeouts for the season.

Arkansas trailed by two after the first inning as Vanderbilt scratched out a couple early runs off starter Patrick Wicklander, who lasted 3 2/3 innings. The left-hander struck out one and allowed three runs on five hits before giving way to the Razorback bullpen.

Kumar Rocker, who started on the mound for the Commodores, was also unable to make it through four innings. Vanderbilt’s ace coughed up the lead in the bottom of the second after Ethan Bates brought home a run on a single through the right side and Matt Goodheart was hit by a pitch with the bases loaded.

The Commodores went back in front in the top of the fourth, but the Razorbacks got to Rocker once again with three runs in the bottom half of the frame. Goodheart’s two-RBI double to left gave Arkansas a 4-3 lead before Cullen Smith singled down the line in right to extend the advantage to two.

Ryan Costeiu, who earned his seventh win of the season, was the first Hog reliever out of the bullpen, striking out two in his 1 1/3 innings of work. He allowed a solo home run in the top of the fifth, but it would do no harm.

Bates delivered his second RBI of the night on a sacrifice fly to center in the bottom of the fifth, re-extending Arkansas’ lead to two. Caden Monke struck out a batter in an inning of work before turning the ball over to Kopps in the seventh.

The right-hander went on to record his eighth multi-inning save of the season and finish off the Razorbacks’ 6-4 win. With the victory, Arkansas advances to the semifinals of the SEC Tournament for the fifth time in its last seven appearances in Hoover.