FAYETTEVILLE, Ark. – Arkansas outfielder Heston Kjerstad has been selected second overall by the Baltimore Orioles in the first round of the 2020 Major League Baseball Draft.

By getting taken second, Kjerstad is the highest Hog drafted since Jeff King, who was the first overall selection in the 1986 draft. His selection also marks the 46th-straight year an Arkansas player has been selected by an MLB squad in the draft, which is tied for the longest streak in the Southeastern Conference. He is the 233rdRazorback selected in the MLB Draft since 1965, the 150th since joining the SEC and 110th under Van Horn.

Kjerstad, the eighth Razorback taken by the Orioles all-time, played three years at Arkansas (2018-20), starting all 150 games of one of the best eras of Razorback baseball, enjoying two SEC Western Division title victories, two trips to the College World Series and a runner-up finish for the national title.

Previously drafted by the Seattle Mariners in 2017 (36th round – 1,083 overall), Kjerstad is the 31stRazorback to improve their draft stock under Van Horn since 2003, making the biggest jump between rounds (35) and draft picks (1,081) 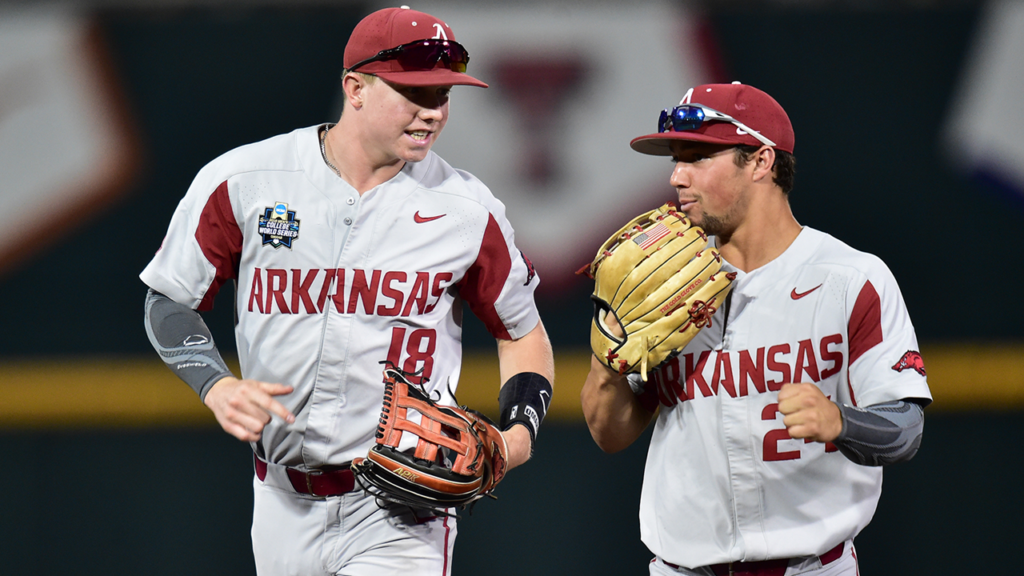 He enjoyed one of the best freshman seasons in Arkansas history, claiming SEC Freshman of the Year, All-SEC Second Team, SEC All-Freshman squad and two Freshman All-America honors (NCBWA & Collegiate Baseball) in 2018. He was just the third Razorback to win SEC Freshman of the Year after tallying 87 hits, setting the Arkansas freshman single-season record with Casey Martin. His 65 runs scored & 14 homers led the team and were good for fourth & ninth in the SEC, respectively, as his 14 dingers also set a freshman mark by a Razorback, along with his 145 total bases.

His sophomore season was equally as impressive, matching his hit total from his freshman year with 87, along with 13 doubles, a triple and 17 homers, which was good for second-most in the conference and 10th in a single-season by a Razorback. He notched 51 RBIs, becoming the first Hog to have 50 or more runs driven in in his first two seasons since Rodney Nye (1998-99), finishing the year with the third-highest batting average on the team at .327. The preseason hype landed him on the Golden Spikes Watch List and he backed it up with another round of All-SEC Second Team accolades to finish out the year.

Kjerstad was surrounded by the hype heading into his junior campaign. The recreation and sport management major began the year on the USA Baseball Golden Spikes Award watch list for the second-straight season, while also earning Preseason First Team All-SEC status from the league’s coaches. The accolades did not stop there, with Kjerstad gaining recognition from five outlets en route to unanimous first team preseason All-America honors.

Just like he did before, Kjerstad backed up the praise, putting up video-game numbers in 2020, finishing the year with a .448/.791/.513 clip at the plate over 67 at-bats. He recorded 30 hits, five doubles and six homers, with 20 RBIs and 19 runs scored. He became the 28th All-America recipient in school history after being named to the Collegiate Baseball Newspaper First Team after the shortened season, the first since earning freshman All-America status in 2018.

As the season came to a close quicker than anyone imagined, the constants that everyone on the Hill anticipated and hoped for remained the same. Kjerstad led the team in seven offensive categories, pacing the conference in hits (30), total bases (53) and slugging percentage (.791), as well as a close second in batting average (.448), while getting recognized by D1 Baseball as the best hitter in the SEC in the outlet’s wrap-up of the year.

The draft continues with the remainder of the first round on Wednesday night, followed by rounds 2-5 on Thursday, June 11, beginning at 4 p.m.