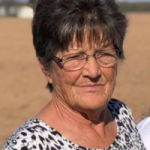 Judy Kathryn Jackson Jones 75, of Dumas passed away January 17, 2020 in North Little Rock, AR. She was born December 23, 1944 in Paris, AR to the late Huey and Edna Grimes Jackson and was a member at Victory Baptist Church in Dumas. Judy worked at Bassett Furniture for 20 years and one of Judy’s favorite things to do was gardening.