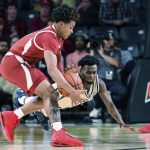 ATLANTA (AP) — Mason Jones banked in a 3-pointer from the right wing with one-tenth of a second left in overtime, helping Arkansas stay unbeaten with a 62-61 victory over Georgia Tech on Monday night.

Georgia Tech took its first lead since the midway point of the first half on James Banks’ short turnaround jumper with 22.3 seconds remaining, but Arkansas did not call timeout before Jones launched 25-footer to send the Yellow Jackets to their second straight loss.

Jones scored 24 points and Isaiah Joe had 13 for Arkansas (6-0), which won its first road game under coach Eric Musselman.

Neither team scored in the extra period before taking their final shots, and the game went to overtime after both teams missed a shot on their last two possessions of regulation. The Jackets tried an in-bound pass and tip for the 6-foot-10 Banks, but the ball bounced off his hands as the buzzer sounded.