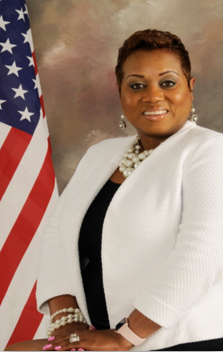 Jefferson County Treasurer Vonysha Goodwin has announced she will be a candidate for reelection in the 2022 Democratic primary.

Goodwin has worked at the Treasurer’s Office as a Deputy Treasurer from 1999 until December 2016 and was elected to the position of County Treasurer beginning in January 2017. She told Deltaplex News why she is the best candidate for the position.

Goodwin is a graduate of Dollarway High School and a 2009 graduate of the University of Phoenix where she received her Bachelor of Science in Business Marketing with an emphasis on finance. She is also a graduate of Leadership Pine Bluff and the Edward M. Coleman Leadership Institute.

She is a member of the NAACP, Treasurer of the Lighthouse Charter School Board, President of the Boys and Girls Club of Jefferson County Board, Chief Financial Officer of the D’Andre Seals Outreach Project, Relyance Bank Diversity and Inclusion Advisory Committee, and a member of Alpha Kappa Alpha Sorority, Inc., where she serves as Treasurer of the Delta Omega Omega Chapter.

Professionally, she is a member of the Arkansas Treasurer’s Association, Association of Arkansas Counties, Jefferson County Democratic Women and Democratic Central Committee.

A Pine Bluff native, Goodwin is the daughter of Levi and Betty Watson and Leo and Marilyn Crane. She is married to Quentin and they have three children, Ketrin, Quiana and Kiara.