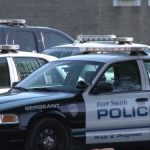 FORT SMITH, Ark.— According to Forth Smith police, a tip was called in Tuesday afternoon about remains found near Riverfront Drive.

Authorities in Fort Smith say they have found possible human remains in the woods near the new U.S. Marshal’s Museum. After searching the area, officers found skeletal remains and clothing.