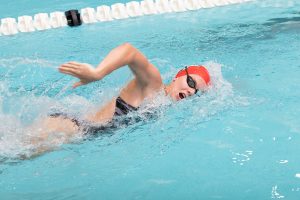 Hopkin started out strong and was the 100 meter freestyle (52.00) English champion en route to setting her first personal best of the weekend.

“It was great to watch all of Anna’s hard work and success this fall culminate in world-class swims back in her home country in front of her family, former teammates, and national team coaches,” head coach Neil Harper said. “She has been so focused and dedicated so I am excited that she will get a little break over the holidays before refocusing and rejoining her teammates for the lead up to the SEC and NCAA Championships.”

Hopkin’s first season with the Razorbacks has been stellar, with the Preston, England native setting seven individual records and two team relay records.

The Hogs will return to the pool after the New Year, with the divers heading to the Georgia Diving Invite from Jan. 4-6. Both the swimmers and divers will compete against Rice and SMU at a double-dual in Dallas, Texas on Jan. 12.