Hogs Shut Out Frogs To Advance To Super Regional

Hogs Shut Out Frogs To Advance To Super Regional 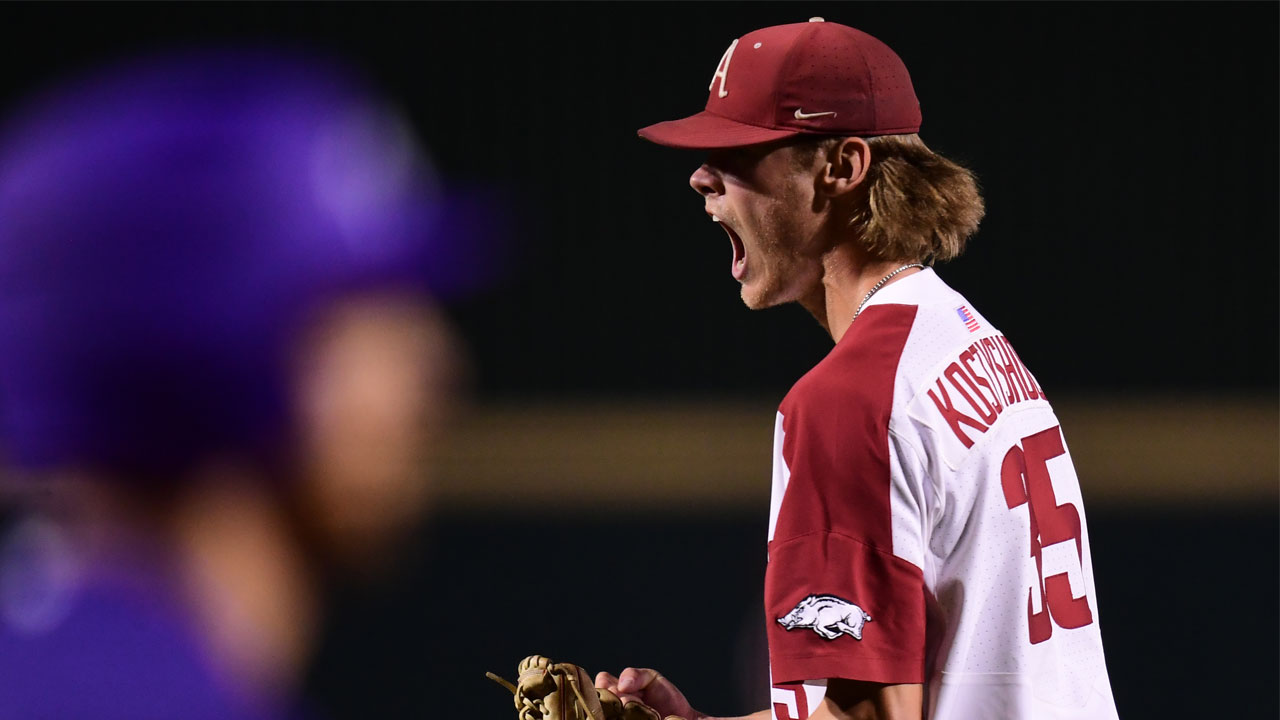 The Razorbacks (44-17) are back in the super regionals for the second-consecutive year. It’s the first time Arkansas has reach the supers in back-to-back years since 2009 and 2010. It was also the eighth time an Arkansas team made it out of a regional without recording a loss.

Arkansas Jumps Out Early
For the first time in the regional, Arkansas was able to jump on its opponent in the first inning scoring three times off TCU starter Jared Janczak to take a 3-0 lead. It started with a one-out, two-RBI double by Dominic Fletcher, his 23rd double of the year and, then, followed with another double, this time from Jack Kenley to bring in Fletcher. The Razorbacks held that lead for the entire game, finishing with its fifth shutout of the season. Sunday’s win was Arkansas’ first shutout in a regional since a 3-0 win over Oral Roberts in the 2017 NCAA Fayetteville Regional. Arkansas also never trailed in its three games in this year’s regional, outscoring its opponents 20-6.

Wicklander Follows Suit With Gem Of His Own
Just like Connor Noland and Isaiah Campbell before him, freshman lefty Patrick Wicklander handcuffed TCU hitters for five scoreless innings, allowing just three hits, one walk and seven strikeouts on 89 pitches. The seven punch outs were just one shy of a season high and most since striking out seven against No. 18 Tennessee (April 27). The Razorback starting pitchers had, arguably, its best week of the season in the Fayetteville Regional. Combined the trio of Noland, Campbell and Wicklander had a 0.99 ERA in 20.1 innings pitched and struck out 17 batters with only two walks allowed.

Goodheart, Goodnight
Sophomore designated hitter Matt Goodheart put one of the final daggers into TCU’s season when he crushed a two-run home run off the scoreboard in right-centerfield in the fifth inning. The blast was his fourth of the year and ended up chasing Janczak from the game. Janczak make it just 4.2 innings and allowed seven hits with five earned runs, but struck out eight. As for Goodheart, the Magnolia, Arkansas native had four hits in the regional and has homered twice in his last four games.

Good Play Begins At Home
Over the last three years, Arkansas at Baum-Walker Stadium has been nearly unbeatable. This year, the Razorbacks are 31-6 at home and only lost one series, which was to future super regional opponent Ole Miss. Since 2017, the Hogs are 95-18 and have only lost three home series. This year, the Razorbacks are averaging 8.6 runs per game at Baum-Walker and the pitching staff has a team ERA of 3.52, while holding opponents to a .219 batting average.

Razorback Quotables
“I thought it was just an outstanding job by Patrick Wicklander. Coming out as a freshman, packed crowd, a night game, had a little delay [because of lightning]. And he just came ouT and did a tremendous job. He only walked one. He did get behind some hitters, but he found a way to fight back from 3-1, 3-2 to get outs, strikeouts. He worked out of a jam or two and gave us a chance to really set up our bullpen to finish the game up.” – Head coach Dave Van Horn on Patrick Wicklander

“It’s grown over the last few years. I think it was pretty good ten years ago, but it’s continued to get better and better. I mean, did you watch the way our players acted when they won the game? It’s like just another game because they know they accomplished something, but they haven’t accomplished what we’re really trying to do. So, I don’t say anything to them after the game but we all noticed it. That’s what we want.” – Head coach Dave Van Horn on the evolution of the culture of the Arkansas program

“I think they played with a lot more energy. Sometimes, maybe you see that maybe you need to work on certain things, but I don’t think you would change a whole lot because the players are nervous or uptight. On Thursday, I said, ‘I’ve had the opportunity to be in a lot of regionals and Super Regionals, I’ve been to Omaha a bunch of times and I’m not nervous this time of the year.’ I’m nervous during the season because it’s hard to get to this point. There are a lot of good teams that aren’t playing anymore. Now that we’re here, I just want you guys to go out and have fun. Let’s see how long we can play together. You need to keep things thing going.” – Head coach Dave Van Horn on his team’s energy and focus this time of year

“I’m just thrilled. It’s been a fun ride so far. As the season comes to an end, it’s only going to get better, I know. So I’m just really excited and honored and privileged to be here.” – Trevor Ezell on advancing to the super regionals in his first year with Arkansas

“It honestly felt very good. It was probably the best ball I’ve hit with two strikes this year. As soon as I hit it, I knew it had a good chance of going. It was the best feeling in the world.” – Matt Goodheart on his fifth-inning home run

“We always feel great at home. We have the best fans in the country. They can change the game for us and we really feel that on the field. I think the other teams, when they come in to play here, can feel that.” – Trevor Ezell on playing well in front of the home crowd