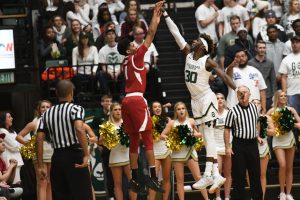 The game was the first true road game for the 6-1 Razorbacks, who dished out at least 2 assists for the four time in five games. Arkansas finished with 28 helpers, the second-best total of the season, while it committed a season-low seven turnovers.

The Razorback bench played a huge factor in Arkansas leading 44-33 at the break. Reggie Chaney scored nine off the bench and Keyshawn Embery-Simpson added eight as the Razorback bench out-scored the Rams’ bench 22-2.

In the second half, Daniel Gafford had 10 points and six rebounds, while Isaiah Joe scored nine. The pair played a key role in a 13-0 run to put their team up 20.

The Rams made 14 free throws, versus just 11 field goals, but Arkansas only committed two, second-half turnovers.