As many as 550 homes in Jefferson County could be affected by floodwaters. Many residences in the Island Harbor and Riverside Drive areas are already inundated.

The Arkansas River at Pine Bluff stands at around 49.7 feet, and is on its way to a 51-foot crest June 5th. Forecasters at the National Weather Service had initially said that the river would crest on June 6th. Emergency officials gathered at the Jefferson County Courthouse this past Friday afternoon to discuss planning for the disaster just as President Donald Trump declared a state of emergency in Arkansas. 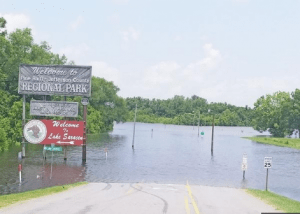 Jefferson County Judge Gerald Robinson said that his office has been in constant contact with the Corps of Engineers and National Weather Service regarding the flood. Robinson also said that the local agencies have been working diligently to correct some issues with areas of concern as far as breaks in our levee system, which is be repaired at this time. The latest endeavor will probably be completed around 8 p.m. on this Friday. Robinson said he is very confident in the repairing of the breaks. He’s road superintendent went out and inspected some of the repairs, especially the ones done by Pine Bluff Sand and Gravel and by the railroad, and they were very sturdy.

Lou Ann Nisbett, president and CEO of the Economic Development Alliance for Jefferson County, said the Port of Pine Bluff is dry for now, but some flooding may occur now that the river has reached 49 feet.