The Super Bowl-champion Patriots finally got their bling.

New England players, coaches, team executives and staff were given a nice break from minicamp and received their Super Bowl LIII championship rings on Thursday night at a private party hosted by owner Robert Kraft at his residence.

The Super Bowl LIII rings are the largest in NFL history, according to Jostens, a provider of custom, hand-crafted fine jewelry for professional sports teams. 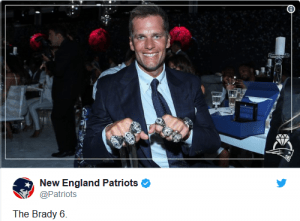 The rings are made up of white gold and 422 diamonds. Other features include the inscription “still here,” the game’s final score (13-3), the player’s name, and their respective uniform number encrusted in diamonds. Inside the ring, an inscription reads “we are all Patriots,” along with Kraft’s signature.

The Patriots’ logo sits between six Lombardi trophies, set with a total of 123 diamonds. Seventy-six diamonds also surround the edges of the ring. Finally, there are 20 blue sapphires, which represent the team’s 20 AFC East division championships. 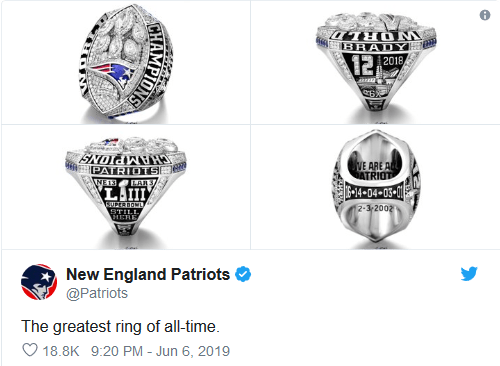 Mike Tyson returns to the ring, but this time, he’s a different man