Headed Back To Omaha!

Headed Back To Omaha! 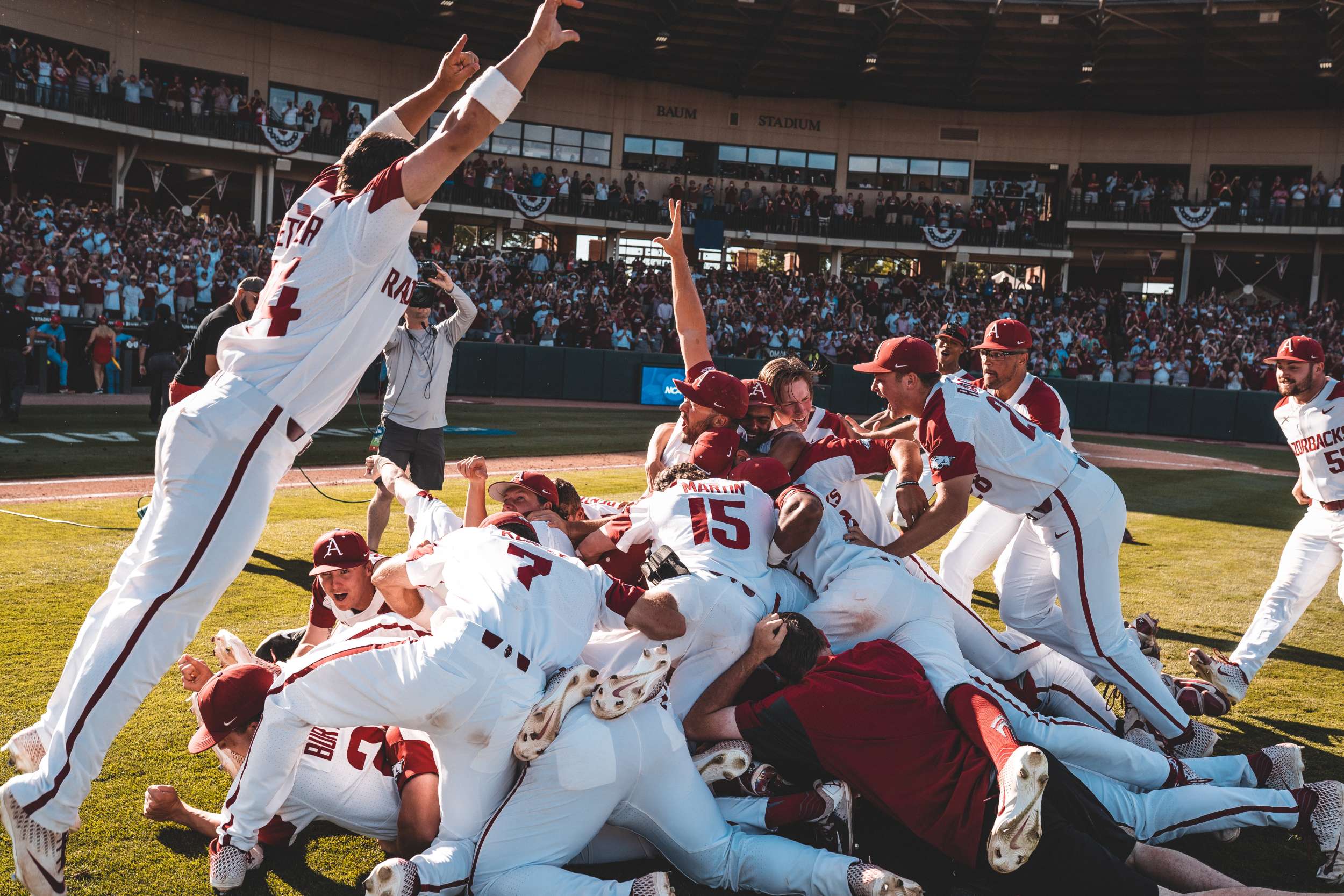 FAYETTEVILLE, Ark. – For the 10th time in program history and sixth time under head coach Dave Van Horn, Arkansas is headed to the College World Series after Monday afternoon’s 14-1 win over Ole Miss in Game 3 of the NCAA Fayetteville Super Regional.

Arkansas (46-18) jumped on Ole Miss (41-27) from the start with eight combined runs in the second through fourth innings. Heston Kjerstad, Casey Opitz and Trevor Ezell all came away with three-hit games. For Ezell, it capped an extraordinary weekend at the plate as he finished the super regional 7-for-14 (.500) with three doubles, a home run and four RBIs.

On the flip side, Arkansas starting pitcher Patrick Wicklander was not able to make it through two innings as he gave up an early first-inning run and then couldn’t get the final out in the second. However, Cody Scroggins relieved him with two outs in the second inning and went on to pitch 4.1 innings of scoreless relief, striking out eight, his most in a relief appearance this year.

The Razorbacks will be paired up with Florida State for the first game of the College World Series. Game information including date and time will be announced later.

Ole Miss Strikes First Before Hogs Pour On
The game looked like it might be headed to a slugfest after Ole Miss scored the game’s first run on a Cooper Johnson single, but Arkansas roared back with four runs in the second, three runs in the third, single runs in the fourth and fifth, followed by a five-spot in the sixth inning. The 14 runs scored matched last year’s super regional elimination game total in the 14-4 and was Arkansas’ largest victory over the Rebels since an 18-4 win in 1996.

Scroggins Saves The Day
With Patrick Wicklander not making it through the second inning on Monday, redshirt junior Cody Scroggins was called upon to come out of the bullpen earlier than expected. Scroggins earned every bit of his third victory of the year, giving up just two hits over the next 4.1 innings, while striking out eight and walking none. It was Scroggins’ longest relief appearance of the year and first of the Super Regional. Jacob Kostyshock and Matt Cronin both followed Scroggins for the final three innings. Combined, they allowed only three hits and struck out one.

Kjerstad’s Bomb Solidifies Arkansas’ 10th Trip to Omaha
Sophomore Heston Kjerstad was 1-for-9 in the super regional coming in to Monday’s game, but broke out his bat in a big way, going 3-for-4 in the game, including a huge blast over the right field bullpen in the bottom of the fifth inning. It was Kjerstad’s 16th home run of the year and first since homering in the regional opener against Central Connecticut. Kjerstad also doubled in his first two at-bats, tying his career-high. His two-bagger in the third inning drove in Arkansas’ fifth and sixth runs of the game. Kjerstad is now third in the SEC in home runs.

Van Horn Secures Eighth College World Series Appearance Of Career
Including two appearances with Nebraska in 2001 and 2002 and now seven trips with Arkansas (2004, 2009, 2012, 2015, 2018, 2019) to the College World Series, head coach Dave Van Horn is now tied for 14th-most appearances in Omaha all-time, tying him with Ron Polk. He will have the most appearances of any current head coach in the SEC and will have the second-most of any coach in this year’s CWS field.

Razorback Quotables
“What a great win for our program, the state, the university.  I could go on and on. The fans. For us to get back to Omaha for the second year in a row. It’s hard enough just to get there once every now and then. But to get there two years in a row with a bunch of guys that watched on the side last year or maybe weren’t even with us.” – Head coach Dave Van Horn on returning to the College World Series

“What a thrill for me as coach to be a part of this and to watch these guys celebrate and the joy. It’s like I told them at the beginning, the pressure for me is during the season. This is fun for me. I love Omaha. I love going to Omaha. But I really, really, truly mean it when I [say] I want them to get there and I just kind of want to go with them. It was just an incredible, incredible ride, a journey or whatever you want to call it this season. Win or lose it’s going to finish in Omaha and that’s where you want to finish.” – Head coach Dave Van Horn on the feeling of taking his team to the CWS in back-to-back years

“Yeah, we knew going into this team it was all hands on deck for both teams. Pitching was depleted, so I just kind of knew all hands on deck when I was getting warmed up. I knew it was my time. I came in the second inning and he just told me the count and said ‘go get ‘em’ and that’s what I did.” – Cody Scroggins on entering the game in the second inning

“It’s just awesome to win that game three and send us back to Omaha this year. It’s been a fun year with all the guys and you know it’s taken everybody on the team. The whole roster. Everybody’s contributed. That’s why we’re a team. It took a team effort and we’re excited to get back to Omaha.” – Heston Kjerstad on getting back to the College World Series

“You know, just playing in the SEC, you’re ready for this moment. You kind of tell with all these SEC teams in these supers, it’s just when you go throughout that grind in the regular season then you’re ready for these moments. You’re ready for these tough games and we proved that right today.” – Casey Opitz on what prepared Arkansas to make another run to the College World Series after the way 2018 ended