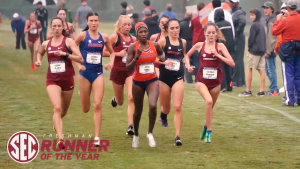 BIRMINGHAM, Ala. – The fifth-ranked Arkansas cross country team picked up three of the four Southeastern Conference postseason awards in recognition of the program’s dominant title performance at the 2018 championship meet.

After earning SEC Freshman/Runner of the Week awards on four occasions throughout the regular season, Katrina Robinson has been named SEC Freshman of the Year following her runner-up finish at the SEC Championships in Auburn, Ala. Robinson has finished as the No. 1 for Arkansas in every one of her races this season while finishing as the fastest Razorback ever over 6K during the SEC Championships with her blistering time of 19:00.88. She is the ninth Razorback to win the award since 2000, and follows in the footsteps of then-freshman Lauren Gregory who won the award in 2017. This is the third-straight season an Arkansas athlete has taken home Freshman of the Year – Abby Gray (’16), Lauren Gregory (’17).

Responsible for coaching the young group to success, head coach Lance Harter has been named the SEC Coach of the Year for the 19th time of his career. The winningest coach in conference history, Harter’s talented squad featured a solid mix of both young and veteran runners, boasting two underclassmen in his top seven at the conference meet. Six runners earned All-SEC recognition including four on the first team.

It was previously announced that Arkansas’ Taylor Werner was voted the Women’s Scholar-Athlete of the Year. Werner, a junior from Ste. Genevieve, Mo., holds a 4.0 grade point average in kinesiology: exercise science. She is a member of the SEC Academic Honor Roll.