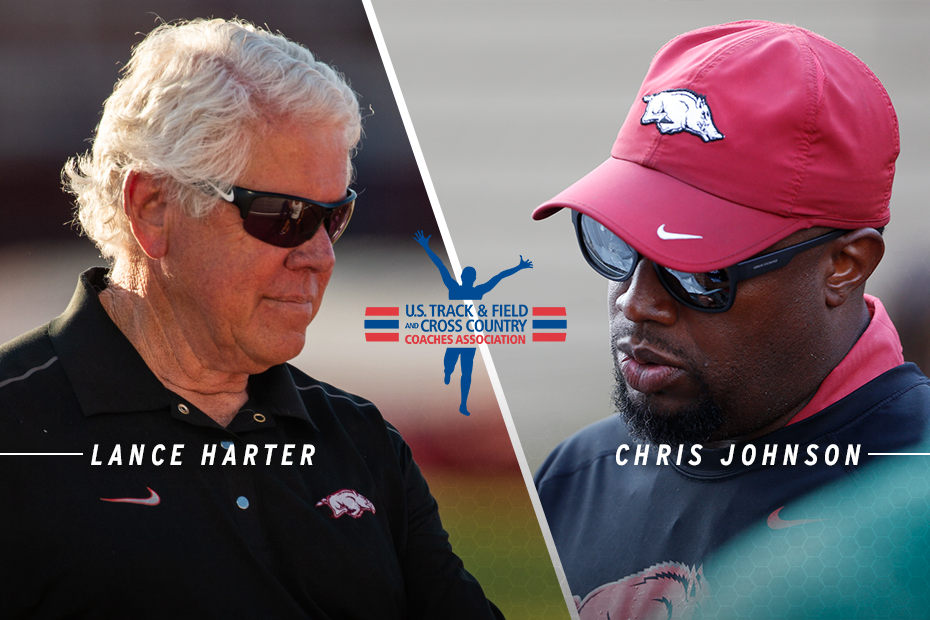 FAYETTEVILLE, Ark. – Arkansas’ Lance Harter and Chris Johnson have been tabbed National Coaches of the Year for the 2019 NCAA Division I Outdoor Track & Field season as announced Tuesday by the U.S. Track & Field and Cross Country Coaches Association (USTFCCCA).

Harter, in his 29th year as head coach of the Razorbacks, led his team to the national title this past weekend in Austin, Texas. Arkansas scored its 64 points across 10 different events, which included individual titles in the 100-meter hurdles and pole vault, as well as runner-up finishes in the 5,000-meters and 4×400-meter relay. The Razorbacks also captured the team title at the SEC Championships with 139.5 points, 54.5 more than runner-up Texas A&M. Arkansas was the top-ranked team in the National Rating Index for the last six weeks of the regular season.

Johnson, in his seventh year coaching the Razorbacks’ sprinters, hurdlers, and jumpers, watched his athletes shine throughout the season, especially this past weekend at the NCAA Outdoor Track & Field Championships in Austin, Texas. Arkansas’ sprinters and hurdlers combined for 39 of the team’s title-winning 64 points, a whopping 61%. Janeek Brown, Johnson’s prized pupil, won the individual title in the 100-meter hurdles in 12.40 – tied for the second-fastest mark in collegiate history and broke the Jamaican national record – and then returned to finish fourth in the 200-meters in 22.40. Those marks together gave Brown the best single-day, 100meter hurdle-200-meter double in world history surpassing the mark set by Jackie Joyner-Kersee in her 1988 Olympic season. Johnson’s athletes propelled the Razorbacks to the team title at the SEC Championships as they accounted for 46% of the program’s 139.5 points.