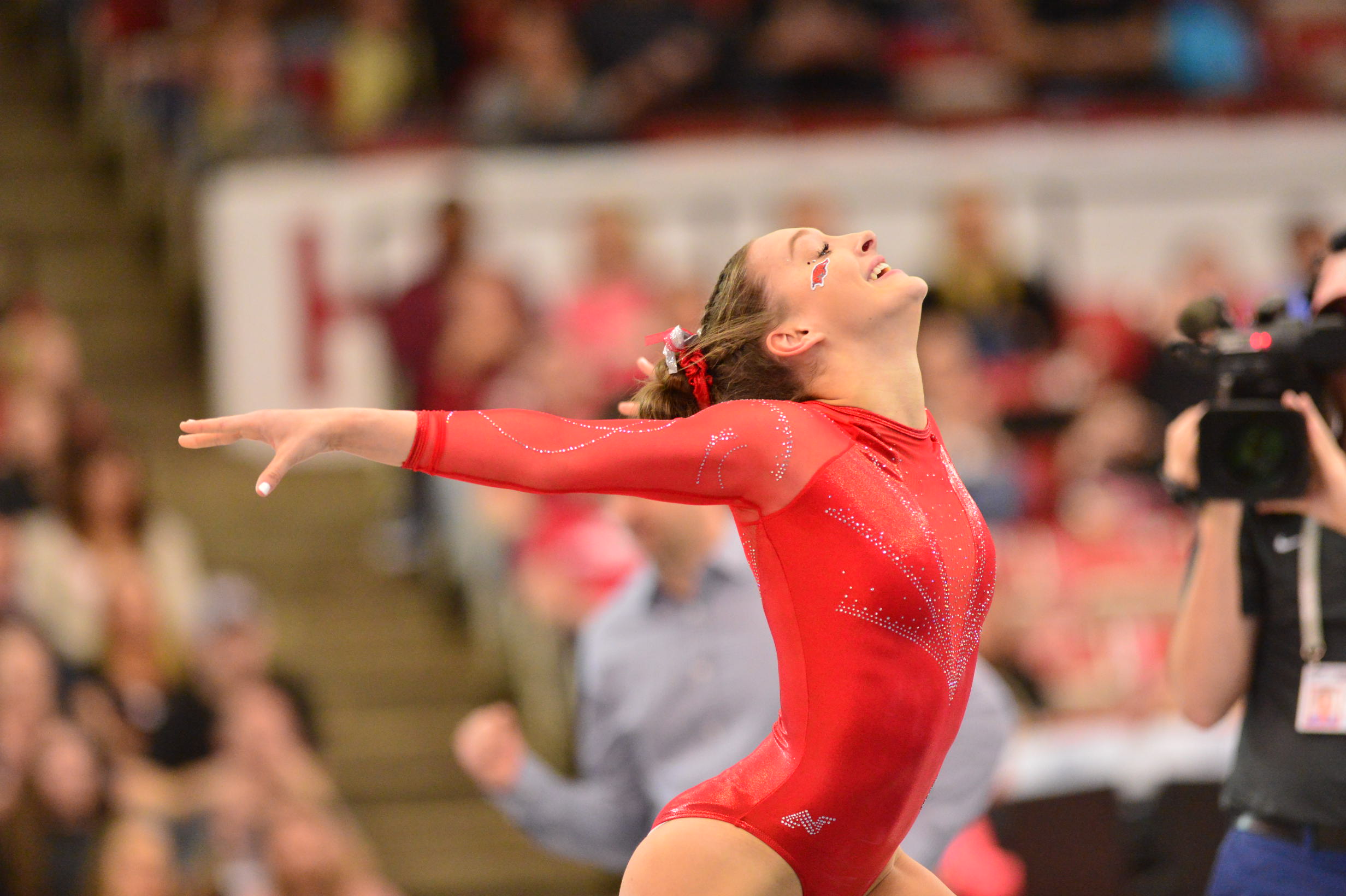 TUCSON, Ariz. – The 10th-ranked Arkansas gymnastics team picked up its first road win of the season at 18th-ranked Arizona, defeating the Wildcats by a score of 195.800-194.725.

The win marks the first road dual meet win for the Razorbacks since defeating Auburn on Feb. 3, 2017. The win gives the Razorbacks eight-consecutive victories over the Wildcats.

First Rotation: Arizona Vault: 48.800, Arkansas Bars: 48.675
All five Razorback scores scored between a 9.700 and 9.775 in the first rotation. Junior Jessica Yamzon led the Razorbacks off with a 9.750 that was followed by a pair of 9.700’s from sophomores Sophia Carter and Sydney Laird. Junior Michaela Burton led the Razorbacks with a 9.775 on the event as anchor and sophomore Sarah Shaffer posted a 9.750.

Second Rotation: Arkansas Vault: 49.150, Arizona Bars: 48.550
Arkansas rebounded on vault, posting a 49.150 on the event off of four scores of 9.800 or higher. Arkansas’ anchors in freshman Kennedy Hambrick and senior Sydney McGlone posted 9.875’s each. The scores are the Razorbacks’ highest on the event this season.

True freshman Amanda Elswick made her much anticipated debut in the third spot on vault. The Austin, Texas native recorded a 9.825 in her first collegiate routine. Shaffer followed Elswick with a 9.825 of her own. The Razorbacks did not score below a 9.750 on the event.

Hambrick and McGlone shared the event title on vault. It was the first of Hambrick’s career, and third-career vault title for McGlone.

Third Rotation: Arkansas Floor: 48.875 , Arizona Beam: 48.675
Arkansas got two scores of 9.800 or higher on the floor as Shaffer scored a 9.825 in the fifth spot. Arkansas’ anchor Carter remained steady on the event, posting a 9.875 after posting 9.950 last week against Oklahoma to take the event title. Hambrick continued her solid night, recording a 9.775 on the event.

Fourth Rotation: Arkansas Beam: 49.100, Arizona Floor: 48.700
Arkansas finished strong on beam. Carter led the Razorbacks with a 9.900 on the event, to take the event title, as beam All-American returned to form with a 9.875 of her own in the final rotation. Hambrick scored a 9.825 in the two spot, as she has scored a 9.800 or higher in 4-of-5 of her first collegiate routines. Shaffer and Burton ended the rotation with a pair of 9.750’s.

Up Next
The Razorbacks hit the road for their first Southeastern Conference meet of the season in Lexington, Kent. against the Kentucky Wildcats. The meet will be televised by the SEC Network and is slated to begin at 5 p.m.