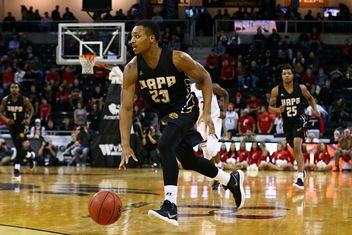 photo:sbnation
Pine Bluff, Ark.– Despite another big night by senior Martaveous McKnight, the University of Arkansas at Pine Bluff men’s basketball team fell to UC Santa Barbara 55-45 Saturday in a non conference match at UCSB Event Center.
The Golden Lions (2-7) jumped out to a 21-17 lead in the last minute of the first half, but the Gauchos (7-2) overcame the deficit in the final seconds of the first half to take a 24-21 lead into intermission.  In the second half the Gauchos raced out to a fast start and outscored the Golden Lions 31-24 for the victory.
KEY STATS

UP NEXT
The Golden Lions are back in action on Monday, Dec. 10 when they will host Christian Champion College in a doubleheader home opener. Tip-off is set for 7:30 p.m., right after the women’s game at 5:30 p.m.