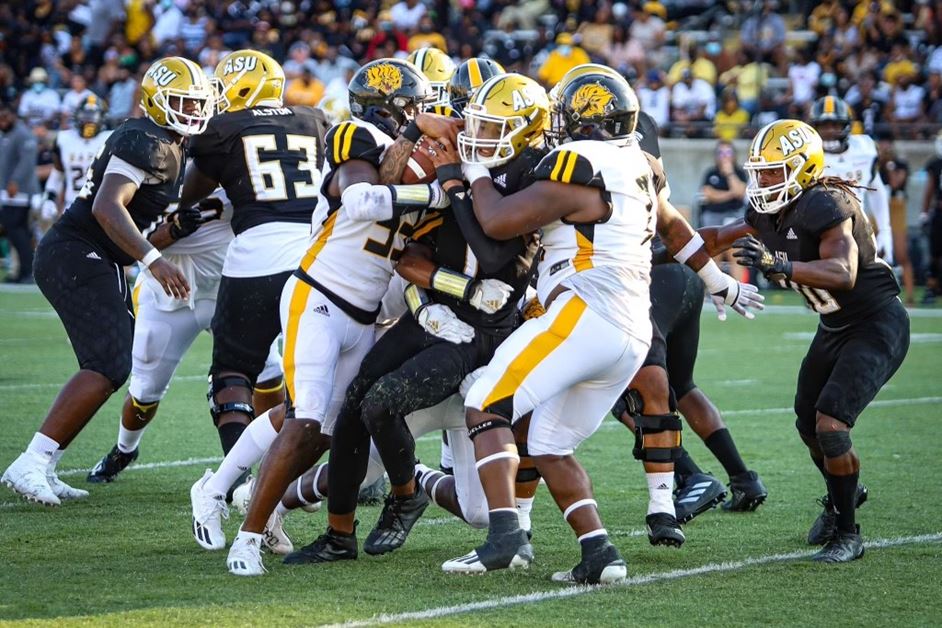 MONTGOMERY, AL – The University of Arkansas at Pine Bluff football team took a loss from Alabama State with a final score of (35 – 15) on Saturday night at ASU Stadium.

WR Dalyn Hill led in receiving yards for Arkansas-Pine Bluff with 109-yards through three receptions, including a long 70-yard pass for a touchdown.

QB Xzavier Vaughn went 6/9 on passing, picking up 156 passing yards under his belt, including two impressive touchdowns for Arkansas-Pine Bluff.

On the defensive side of the ball, LB Isaac Peppers led the Golden Lions in tackles, finishing the game with eight tackles, followed by DB Jalon Thigpen, DB Andre Fuller, and LB Monroe Beard III, who each had seven tackles apiece.

After being down (14 – 0) in the first half and going scoreless, UAPB had some work to get done in the second half. All the Golden Lions needed to see was a set of points on the board to get things going.

With 8:11 left to go in the third quarter, kicker Zack Piwniczka would attempt a field goal from the 28-yard line, in which his attempt was successful to get the Golden Lions on the board to bring the score to (14 – 3).

After studying the Alabama State defense on the sideline, QB Xzavier Vaughn got his chance to produce for the Golden Lions in the fourth quarter.

Earning a first down at the Alabama State 16-yard line, Vaughn played with patience against the Alabama State defense, attacking the gap and keeping his head up, which allowed him to find WR Daemon Dawkins for 16 passing yards in the Alabama State endzone, earning the Golden Lions’ first touchdown of the contest to bring the score to (28 – 9).

Five minutes later into the fourth quarter, Vaughn made his presence known to the Alabama State defense as an offensive threat and that they would have to sack him to stop him.

With 4:10 remaining in the game, Vaughn would remain calm under pressure and got the ball out of his hands before being hit by two Hornet jerseys, finding WR Dalyn Hill, who mossed two ASU players for the catch. Hill came down with the ball and hit a juke move immediately after to find a clear path to the Alabama State endzone before faking another ASU defender to score a touchdown and bring the score to (28 – 15).

“When the next man is up, there is no drop-off, and with me studying the defense from the sidelines, I know what’s going on,” said Vaughn about reading the Alabama State defense.

UAPB would try to capitalize on their next drive to close the deficit more, but it was too late. The clock would run out, resulting in the Golden Lions falling to Alabama State with a final score of (35 – 15).

“We’re not playing clean football on offense, so we have to get some overdue things fixed,” said second-year UAPB head coach about not being able to capitalize in the red zone.

The Golden Lions will return to their home turf Saturday to take on the Southern University Jaguars for homecoming/pink-out. The game will kick off at 2 p.m. at Simmons Bank Field and will be broadcasted live on ESPN+ and UAPB Sports Network. You can also listen live on 99.3 FM The Beat.