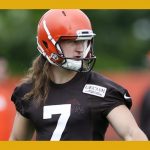 Former University of Arkansas At Pine Bluff football player Jamie Gillan made his NFL debut as the Cleveland Browns opened the preseason hosting the Washington Redskins.

Gillan, who signed as a free agent following the NFL Draft, averaged 42.0 yards on two punts, including one inside the 20, as the Browns opened the preseason with a 30-10 win.

In 2018, Gillan led the SWAC with an average of 42.9 yards per punt to rank 13th in FCS football with a net average of 37.5 yards.  A total of 19 punts traveled more than 50 yards, and 27 of his punts were down inside the opponents’ 20-yard line.  Gillan also had 31 touchbacks, which ranked 16th nationally and allowed only 17.4 yards per return.  Gillan earned first-team All-SWAC honors at both punter and kicker.

The Browns continue the preseason next Saturday against the Indianapolis Colts.