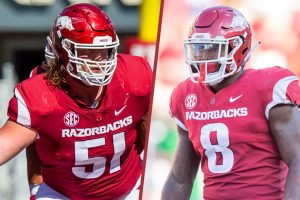 It marks back-to-back years Harris has received second team honors from the outlet and is the first for Froholdt from the AP. Harris’ accolade is the fourth all-conference distinction over the last two seasons, while Froholdt picked up his third overall award, earning two in 2017.

Froholdt, the senior offensive lineman from Svendborg, Denmark, started all 12 games for the Razorbacks in his final year in Fayetteville. He played in a team-high 815 offensive snaps, primarily at left guard (542), but began the 2018 campaign at center (260) due to a teammate’s injury. Froholdt did not allow a sack in 440 pass blocking snaps, according to Pro Football Focus, doing so for the second consecutive season. His work on the offensive line produced a 90.0 grade by PFF, the fourth-highest among SEC lineman, as the Razorbacks totaled 4,028 yards of total offense.

Harris, a junior linebacker from Harvey, Louisiana, led the SEC in total and solo tackles with 118 and 62, respectively. He was the first Arkansas defender to tally 100+ tackles in back-to-back seasons since Jerry Franklin (2010-11), leading the team in both years with 115 in 2017. Harris also led the Razorbacks in tackles for loss for the second consecutive year, totaling 9.0 this year and 8.5 last season. He posted the team-lead in tackles in seven of 12 games this year, totaling a conference-best seven double-digit tackle performances over the course of his junior campaign.