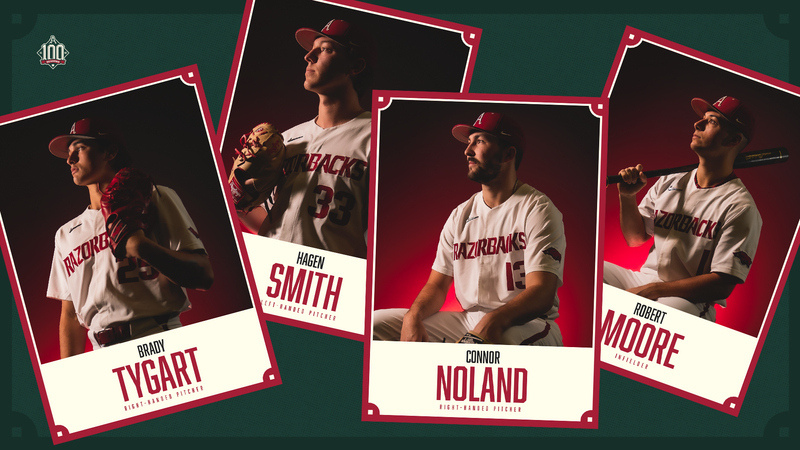 Tygart emerged as the Razorbacks’ relief ace this season, recording a team-leading eight saves with a 2.12 ERA over 34 innings out of the bullpen. The Hernando, Miss. native has struck out 47 and held opposing hitters to a .191 batting average, allowing just three extra base hits all year. Tygart is four saves shy of tying Phillip Stidham’s single-season program record for saves by a freshman (12).

Smith has held down a spot in the Razorbacks’ rotation all season, posting a 6-2 record with a 4.93 ERA in 14 games with 13 starts. The true freshman from Bullard, Texas, who is tied for the team lead in wins (6), has struck 72 and limited opposing hitters to a .243 batting average over 65 2/3 innings of work.

With Tygart and Smith, Arkansas is one of three teams with multiple freshmen to earn All-SEC honors. Tennessee (3) and Vanderbilt (2) also placed multiple players on the Freshman All-SEC Team.

Moore, meanwhile, earned a spot on the SEC All-Defensive Team at second base for the second season in a row. The slick-handed infielder from Leawood, Kan., has a .995 fielding percentage this year, committing just one error in 204 chances. He is responsible for 38 of Arkansas’ SEC-leading 47 double plays turned this season.

Noland also received praise for his prowess in the field, landing on the league’s all-defensive squad at pitcher. The right-hander from Greenwood, Ark., who owns 5-4 record with a rotation-leading 3.75 ERA over 81 2/3 innings, has not committed an error in his 14 starts on the mound this season.

With Moore and Noland, Arkansas is one of two programs with multiple players recognized for their defense. LSU (2) also placed a pair of fielders on the SEC All-Defensive Team.

The Razorbacks are the No. 3 seed at the 2022 SEC Baseball Tournament in Hoover, Ala. Arkansas opens play at 9:30 a.m. Wednesday, June 1, at The Hoover Met against the winner of No. 6 seed Georgia and No. 11 seed Alabama.