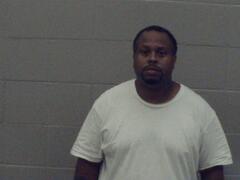 The second suspect being sought in a July 26 murder was arrested Wednesday and formal charges haves now been filed against him.

James Dixson, 42, was located by Pine Bluff Police and Jefferson County Sheriff’s deputies and taken to the adult detention center. He was identified as one of two men seen leaving the scene of a fire at 2307 W. 11th Ave., and a badly burned body was found inside that residence.

The state medical examiner’s office determined that the cause of death was homicide because the victim had been shot to death before the house was set on fire.

Dixon had his first court appearance Thursday in Jefferson County District Court where Judge Kim Bridgforth read the charges against him.

Dixson is also being charged with using a firearm in the commission of another crime and has been convicted of at least one but less than four violent felonies and if convicted, could face an enhanced sentence.

A second defendant, Kevin McKinney, 42, turned himself in last week and is facing the same charges. Both are being held without bond.,

More information has becoming available in the arrest of murder suspect James Dixson.

Dixson was wanted in connection to a homicide at 2307 W. 11th after a body was located after Pine Bluff Fire and Emergency Services extinguished a house fire at that location.

On July 29, 2022 a doctor with the Arkansas Crime Laboratory notified Pine Bluff detectives that the autopsy of the victim revealed that the cause of death was gunshot wounds and the manner of death has been ruled as a homicide.  The identity of the deceased has not yet been positively identified due to the condition of the body.

Detectives with the Pine Bluff Police Department have developed two suspects in this homicide.  James Dixson and Kevin McKinney.

McKinney turned himself in on August 3, while Dixson continued to attempt to evade capture.

Jefferson County Sheriff Lafayette Woods Jr. tells Deltaplex News that on Tuesday the Pine Bluff Police Department requested assistance to serve a warrant at a house located at 304 Highway 425 after watching the house with belief that Dixson was located inside.

The Sheriff’s Office deployed their Special Response Team (SRT) along with their Mine Resistant Ambush Protected (MRAP) vehicle to assist the Pine Bluff Police Department SWAT Team in serving the warrant.

Upon arrival commands were given for all occupants inside of the house to come out of the house. Two black males, one with a child, and a black female complied with orders and came out of the front door.

Officers believed Dixson was still inside of the home, and the Pine Bluff SWAT Team deployed CS Gas inside of the home after trying to talk him out of the home for approximately 45 minutes. Jefferson County Deputies deployed additional CS Gas a short time later before making entry into the home.

Once the home was cleared it was determined Dixson was not in the house. Officers and Deputies believe he was at the house, but may have fled out of the back door prior to arrival of the SRT and SWAT Teams due to his vehicle being located at the residence.

According to information obtained by Deltaplex News, Dixson’s wife, 37-year-old Mary Dixson, was arrested on charges of hindering apprehension for prosecution, and harboring or concealing a wanted fugitive during the process of attempting to serve the warrant on Tuesday.

Deltaplex News was aware of the police action taking place at 304 Highway 425, but chose not to share information on the situation due to the sensitivity of the matter.

On Wednesday the Jefferson County Sheriff’s Office located and arrested Dixson as continuation into Tuesday’s assistance of the Pine Bluff Police Department resulted in finding his location.

Sheriff Woods, Jr said the following about the arrest:

“We simply responded to the aid of the PBPD (Pine Bluff Police Department), which ultimately resulted in our DTF capturing Dixson.”

Dixson has been booked into the Jefferson County Adult Jail on charges of Capital Murder, Arson, Abuse of a Corpse, and Possession of a Firearm by a Certain Person.