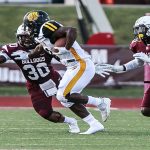 HUNTSVILLE, Ala. – The University of Arkansas at Pine Bluff football team opened conference play with a 52-34 win at Alabama A&M in the Southwestern Athletic Conference opener for both teams.

“It’s just a sense of accomplishment for these kids,” said UAPB head coach Cedric Thomas. “They really worked their tails off to prepare to be successful. That’s the only reason why we played as such. They did a great job preparing and growing and understanding the analytics. That’s a good team we played, but we played our tails off. We kind of bent, but that’s the mentality, to bend but not break, and I thought we did a good job of that. That’s a good offense and they (Alabama A&M) started to get some plays on us later on, but I’m very proud of them, proud of this coaching staff, and the support we had from the fans in the stands. This was an overall win for the community, the program and everyone.”

UAPB (1-1 overall, 1-0 SWAC) scored on the first drive, taking just three plays to move 58 yards. Perry and Ballard connected on a 59-yard scoring pass to take a 7-0 lead. Following a tying AAMU touchdown, the Golden Lions scored on their third possession, as Zack Piwniczka connected on a 30-yard field goal to give UAPB a 10-7 lead with 7:17 to play in the first quarter.

After Alabama A&M (1-1, 0-1) took the lead at 14-10 with just over five minutes to play in the opening period, the remainder of the first half was dominated by UAPB.

Tyrin Ralph caught a 28-yard scoring pass from Shannon Patrick with just over two minutes to play in the first quarter to give the lead for good, 17-14. In the second quarter, Perry drove the Golden Lions 80 yards in 10 plays, as Jeremy Brown’s eight-yard TD reception extended the lead to 24-14.

Following a short punt, it took Arkansas At Pine Bluff just one play to score, as Patrick and Ballard connected on a 49-yard scoring pass to give the Golden Lions a 31-14 lead they would take to the halftime locker room.

UAPB stayed aggressive in the third quarter, as Monroe Beard III recovered a surprise onside kick to begin the half. From there, Patrick threw a 27-yard touchdown pass to Dejuan Miller three plays later to extend the lead to 38-14.

Following an Alabama A&M punt, the Golden Lions scored two plays later, as Porter scampered 53 yards for a touchdown to extend to a 45-14 lead with 12:18 to play in the third quarter.

After a Bulldog touchdown, UAPB scored for the final time as Perry threw a 24-yard touchdown pass to Ballard to take a 52-24 lead at the mid-way point of the third quarter.
UAPB will play its home opener vs. Langston at 6 p.m. Saturday at Simmons Bank Field.