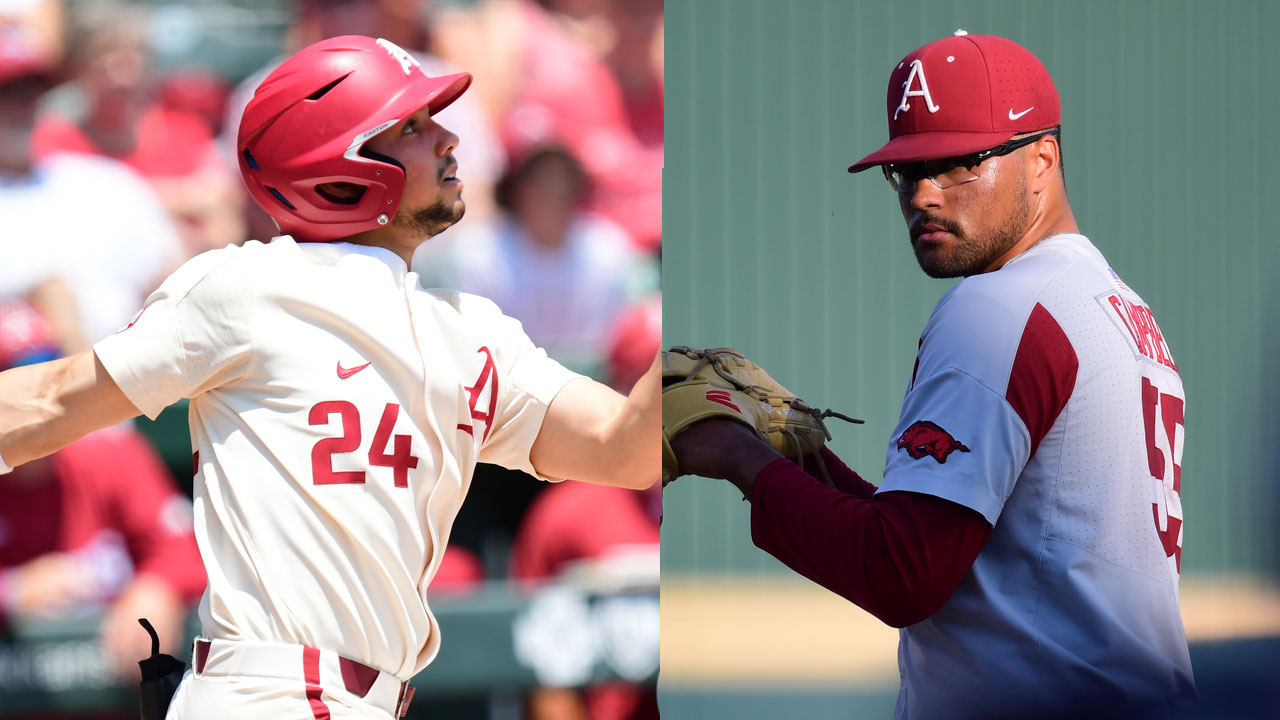 FAYETTEVILLE, Ark. –  Redshirt junior right-handed pitcher Isaiah Campbell and junior outfielder Dominic Fletcher were the first Razorbacks taken in the 2019 Major League Baseball (MLB) First-Year Player Draft Monday night. The duo was taken in back-to-back picks in Competitive Balance Round B as Fletcher was taken by Arizona, No. 75 overall, while Campbell was taken by Seattle, No. 76 overall.

Fletcher and Campbell are the 15th and 16th Razorbacks to be taken in the draft’s first three rounds since 2010. Campbell is the sixth pitcher since 2013, while Fletcher is the first position player taken that high since Andrew Benintendi went in the first round to Boston in 2015.

With Monday’s selections, Arkansas has had at least one player picked in each of the past 45 MLB Drafts dating back to 1975. Also, there have now been 90 players drafted at least once under Dave Van Horn since he became head coach in 2003.

Over the last three seasons, Fletcher has shown why he’s one of the best players in the nation both offensively and defensively. In 2019, alone, Fletcher is having his best year at the plate, hitting .312 with 77 hits, 23 doubles and 10 home runs, while slugging .526. All of those numbers are career-bests as he’s hit 10 or more homers each year of his career and is the current SEC leader in doubles through 61 games.

Fletcher is a .297 career hitter for the Razorbacks and has 218 hits, 32 home runs and 142 RBIs in 189 games at Arkansas. He needs 11 hits, one home run and 17 RBIs to crack into the Arkansas all-time career charts in each of those categories. Only four Razorbacks are in the top-10 in all three offensive categories (Ryan Lundquist, Danny Hamblin, Greg D’Alexander, Jeff King).

Defensively, there may not be a better centerfielder than Fletcher as he’s only made nine errors in three years (.981) and has seven outfield assists to his name. This year, he has a career-low two errors in 162 chances.

Campbell was selected in last year’s draft as a redshirt sophomore by the Los Angeles Angels of Anaheim (24th, No. 721), but elected to come back to Fayetteville for his fourth year and has had one of the biggest jumps of any pitcher in the nation.

The Olathe, Kansas native has racked up an 11-1 record this year and has helped the Hogs into their second-straight NCAA Super Regionals, their eighth appearance in supers in school history. He recently was named an All-American by Collegiate Baseball Magazine and showed his All-American stuff in the NCAA Regional last week with a career-high eight-inning, one-run performance against TCU to put the Hogs into the regional final.

Campbell has racked up a team-best 2.27 ERA among Hog pitchers that have thrown 40 or more innings and has struck out 108 batters over 103 innings, which are all career-bests. Campbell topped the 100-strikeout mark during his start in the SEC Tournament and is now sitting ninth all-time on the Arkansas single-season charts with 108 strikeouts.

Throughout his career, Campbell has made 48 appearances on the mound since 2016, 39 being starts. He has a 3.29 ERA in 205 innings and has held opponents to a .232 batting average. Last week, in his start against TCU in the regional, Campbell reached 200 strikeouts in his career, becoming the sixth Razorback under Van Horn with 200 or more strikeouts in a career.

Day two of the draft will commence on Tuesday on MLB.com. Rounds 3-10 will be conducted, followed by rounds 11-40  on Wednesday, which will be the final day of the draft. All selections can be followed on MLB.com.